Whitefield is part of the Berlin, NH–VT Micropolitan Statistical Area. The central village in the town, where 1,460 people resided at the 2020 census, is defined as the Whitefield census-designated place (CDP) and is located at the junction of U.S. Route 3, New Hampshire Route 116 and NH Route 142.

The last town to be granted under the English provincial government, Whitefield was chartered on July 4, 1774, exactly two years before adoption of the Declaration of Independence. Some believe it was named for George Whitefield, a famous English evangelist, and a friend of William Legge, 2nd Earl of Dartmouth, the patron of Dartmouth College. Others believe the name originated from earlier references to the snowy white fields one would see upon approach through any of the surrounding mountain passages. The chartered name was "Whitefields" but the "s" was dropped on December 1, 1804—the date of incorporation. Early grantees included Jeremy Belknap, historian, and John Langdon, who succeeded John Wentworth as governor.

With the entrance of the railroad in the 19th century, tourists discovered the town and its cool, clean mountain air. They sought relief from the heat, humidity and pollution of coal-era summers in Boston, Hartford, New York and Philadelphia. Several inns and hotels were built to accommodate their increasing numbers. On a hilltop facing the Presidential Range is the grandest, The Mountain View House (now called the Mountain View Grand Resort & Spa), established in 1866. The historic hotel underwent an extensive renovation in the 2000s, and is now one of the most luxurious in New Hampshire.

Whitefield has many examples of Victorian architecture, including a landmark bandstand built in 1875 on the common. The century old town hall with bell tower was torn down in 2013. At the 2014 Town Meeting, voters chose to build a pre-fab building to be located outside of the town center.

According to the United States Census Bureau, the town has a total area of 34.7 square miles (90 km2), of which 34.2 sq mi (89 km2) is land and 0.4 sq mi (1.0 km2), or 1.24%, is water. Whitefield is drained by Bog Brook and the Johns River, which runs through the center of town. Forest Lake, the largest lake in town, straddles the Whitefield/Dalton town line and is located southwest of the town center. Burns Lake is near Forest Lake, off Route 116 closer to the town center. Mirror Lake is a small water body close to Route 3 north of the center of town.

The two highest points in Whitefield are Howland Hill and Kimball Hill, both of which top 1,712 feet (522 m) above sea level.

The central village of Whitefield, a census-designated place, has a total area of 1.3 sq mi (3.4 km2). 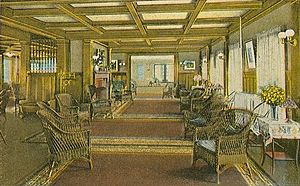 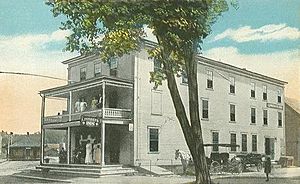 Whitefield is at the intersections of New Hampshire Route 116 and U.S. Route 3 and is also served by New Hampshire Route 142, which leads to Dalton and points beyond. Once important but now seldom-used railroad lines of the Maine Central and Boston and Maine railroads run through town. The Mount Washington Regional Airport is located in Whitefield. As of January 2006 Whitefield is also served by The Tri-Town Bus, a public transportation route connecting with Lancaster and Littleton.

All content from Kiddle encyclopedia articles (including the article images and facts) can be freely used under Attribution-ShareAlike license, unless stated otherwise. Cite this article:
Whitefield, New Hampshire Facts for Kids. Kiddle Encyclopedia.