Kids Encyclopedia Facts
For other places with the same name, see Pittsburg (disambiguation).

Pittsburg is a town in Coös County, New Hampshire, United States. The population was 800 at the 2020 census. It is the northernmost town in New Hampshire and the largest town by area in New England. U.S. Route 3 is the only major highway in the town, although the northern terminus of New Hampshire Route 145 also lies within Pittsburg.

Pittsburg derives its name from William Pitt, Prime Minister of the United Kingdom. Prior to its incorporation in 1840, the area was settled c. 1810 and known as the Territory of Indian Stream. It had the unique distinction of having been its own microstate briefly during the 1830s, called the Republic of Indian Stream, due to an ambiguous boundary between the United States and Canada.

Pittsburg shares an international border with Québec province, Canada to its west and north, and borders the states of Maine (to the east) and Vermont (a very small portion to the southwest). Directly to the south is Clarksville. Pittsburg is the only New Hampshire municipality to border Canada, the only one that borders both Maine and Vermont, the only one to share a land border with Vermont, and the only town entirely north of the 45th parallel. Pittsburg contains the only part of New Hampshire west of the Connecticut River, as that river defines the Vermont state line from Clarksville southward. New Hampshire's only Canadian border crossing is located at the northern end of town at the terminus of U.S. Route 3. The western edge of Pittsburg is defined by Halls Stream, being the "northwesternmost headwaters of the Connecticut River", which defined (ambiguously) the border in the Treaty of Paris of 1783.

Contained within the boundaries of Pittsburg are the Connecticut Lakes, which form the beginning of the Connecticut River. Early maps (e.g. 1854) also show several grants that were incorporated into the eastern edge of Pittsburg, including Carlisle No. 1, Webster/Carlisle No. 2 and Hubbards No. 3, all north of Atkinson and Gilmanton Academy Grant. 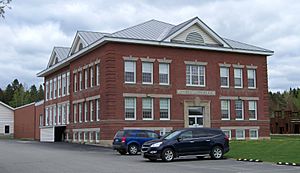 There were 386 households, out of which 22.3% had children under the age of 18 living with them, 59.1% were married couples living together, 4.4% had a female householder with no husband present, and 31.6% were non-families. 26.7% of all households were made up of individuals, and 14.8% had someone living alone who was 65 years of age or older. The average household size was 2.24 and the average family size was 2.67.

Pittsburg is a mecca for snowmobile and ATV enthusiasts year round. In the winter months thousands of people flock to Pittsburg to take advantage of the state-funded and club-supported and maintained trails that can bring snowmobilers from anywhere in the state of New Hampshire to Pittsburg, with access to the states of Maine, Vermont and the border crossing to Canada. Some of the same trails are used in the summer for ATVs. Check the Pittsburg Ridge Runners Snowmobile Club and the Great North Woods Riders ATV Club web sites for further information. Also, for weather information specific to the First Connecticut Lake in Pittsburg check John's NH Weather for current conditions, forecast and much more.

Another focus in the area for tourists is fishing and hunting. Pittsburg is home to the four Connecticut Lakes, Back Lake, part of Lake Francis, and numerous smaller water bodies. The lakes are annually stocked with fish and allow for weekends of good fishing. The area is known for fly fishing. Two sections of the Connecticut River are fly fishing only, including the "Trophy Stretch". The Connecticut Lakes Region has attracted anglers and hunters since the turn of the century. There are maps on the local snowmobile club's website that can be helpful in planning a trip to the area. It shows all trails in Pittsburg as well as roads and access points to the lakes and rivers.

All content from Kiddle encyclopedia articles (including the article images and facts) can be freely used under Attribution-ShareAlike license, unless stated otherwise. Cite this article:
Pittsburg, New Hampshire Facts for Kids. Kiddle Encyclopedia.