Canaan is a town in Essex County, Vermont, United States. The population was 896 at the 2020 census. Canaan contains the village of Beecher Falls, located at the confluence of the Connecticut River and Halls Stream. It is part of the Berlin, NH–VT Micropolitan Statistical Area.

Due to Québécois ancestry, 26% of Canaan residents speak French as their primary language, making the town one of New England's "Little Canadas." This is a decrease from 1982, when nearly 44% spoke French as their native language. 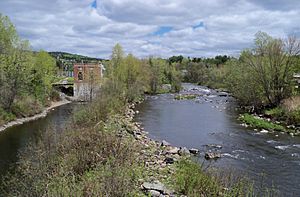 The Connecticut River between Canaan and Stewartstown, New Hampshire

Canaan is the northeasternmost town in Vermont, bordered by the Canadian province of Quebec to the north and the U.S. state of New Hampshire to the east. It is one of two towns in Vermont to share a border with both another state and Canada, the other such town being Alburgh in the northwestern corner. Canaan is also the only town in Vermont to share a land border with New Hampshire - the town's far northeastern corner touches the southwestern corner of the town of Pittsburg - as the Connecticut River defines the state line from Canaan southward.

There were 441 households, out of which 33.6% had children under the age of 18 living with them, 55.1% were married couples living together, 8.6% had a female householder with no husband present, and 30.4% were non-families. 26.8% of all households were made up of individuals, and 11.1% had someone living alone who was 65 years of age or older. The average household size was 2.44 and the average family size was 2.94.

During the 1900s until the present, the town of Canaan has undergone a number of changes. Family farms have disappeared, logging jobs have decreased and tourism is now one of the major engines that drives the local economy.

The Beecher Falls furniture factory, a division of Ethan Allen, closed its manufacturing unit in August 2009, leaving over 250 people out of work. Started in 1895, the factory at one time was the largest furniture manufacturer east of Michigan.

In recent years, competition from overseas has had an adverse impact on operations and only a few people are now employed in the rough mill. Although most of the factory is now closed, people in the community have a positive attitude and are confident the overall economic climate will improve in the future.

Since the start of the 20th century, Canaan has lost many logging jobs and most family farms. Tourism is now an important part of the local economy.

The Beecher Falls furniture factory, a division of Ethan Allen, closed its manufacturing unit in August 2009, laying off 238 workers and leaving only the rough mill open. The plant opened in 1895 and was once the largest furniture factory east of Michigan.

All content from Kiddle encyclopedia articles (including the article images and facts) can be freely used under Attribution-ShareAlike license, unless stated otherwise. Cite this article:
Canaan, Vermont Facts for Kids. Kiddle Encyclopedia.