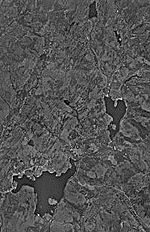 The Connecticut Lakes are a group of lakes in Coos County, northern New Hampshire, United States, situated along the headwaters of the Connecticut River. They are accessed via the northernmost segment of U.S. Route 3, between the village of Pittsburg and the Canada port of entry south of Chartierville, Quebec. The lakes are located within the boundaries of Pittsburg, but are far from the town center. Connecticut Lakes State Forest adjoins them.

First Connecticut Lake is located in the town of Pittsburg, 5 miles (8 km) northeast of the village center. At 3,071 acres (1,243 ha), it is the eighth-largest lake located entirely in New Hampshire. It is the lowest (and largest) of the chain of lakes near the headwaters of the Connecticut River. 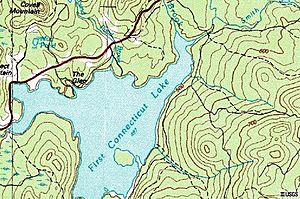 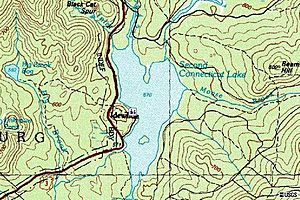 Third Connecticut Lake is a 231-acre (93 ha) water body in the town of Pittsburg, situated 5 miles (8 km) upstream from Second Connecticut Lake and less than 1 mile (1.6 km) south of the Canada–United States border. The lake is the third in a chain of lakes marking the headwaters of the Connecticut River. It is approximately 100 feet (30 m) deep at its deepest part. 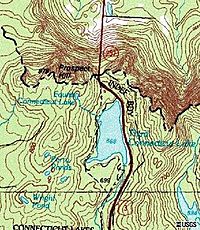 The 25,000 acres (10,000 ha) surrounding the lakes was set aside as a land conservation project in 2002 by the New Hampshire Fish and Game Department. The protected area is within the towns of Clarksville and Pittsburg, up to the border with Canada.

All content from Kiddle encyclopedia articles (including the article images and facts) can be freely used under Attribution-ShareAlike license, unless stated otherwise. Cite this article:
Connecticut Lakes Facts for Kids. Kiddle Encyclopedia.