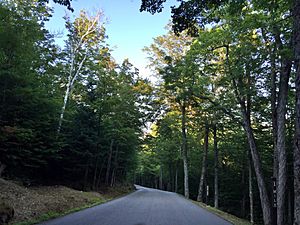 A small portion of the Mount Washington Auto Road passes through Pinkham's Grant.

Pinkham's Grant is a township located in Coos County, New Hampshire, United States. As of the 2010 census, the grant had a total population of 9.

In New Hampshire, locations, grants, townships (which are different from towns), and purchases are unincorporated portions of a county which are not part of any town and have limited self-government (if any, as many are uninhabited).

According to the United States Census Bureau, the grant has a total area of 3.8 square miles (9.8 km2), all of it land. The highest point in the grant is 3,050 feet (930 m) above sea level along Wildcat Ridge on the grant's eastern boundary. The grant occupies the center of Pinkham Notch, a major pass in the White Mountains.

The base of Wildcat Mountain Ski Area is located in Pinkham's Grant. A short stretch of the Mount Washington Auto Road also passes through the township.

All content from Kiddle encyclopedia articles (including the article images and facts) can be freely used under Attribution-ShareAlike license, unless stated otherwise. Cite this article:
Pinkham's Grant, New Hampshire Facts for Kids. Kiddle Encyclopedia.