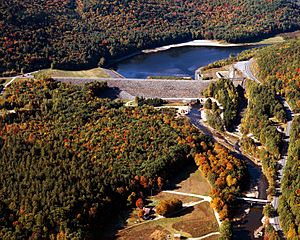 Townshend Lake and Dam on the West River in Windham County, Vermont 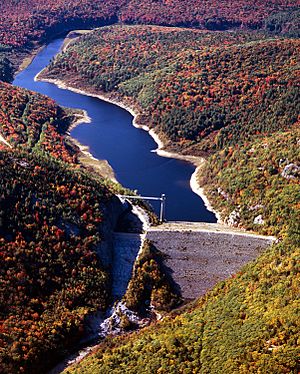 Ball Mountain Lake and Dam on the West River in Windham County, Vermont

The West River is a tributary of the Connecticut River, about 53.8 miles (86.6 km) long, in southern Vermont in the United States. According to the Geographic Names Information System, it has also been known historically as "Wantastiquet" and as "Waters of the Lonely Way". Its watershed covers 423 square miles (1,100 km2); land use is about 90% forested and 3% agricultural, and the upper river supports wild native brook and wild brown trout, while Atlantic salmon occur in most of the river.

The West River rises in the Green Mountains in the town of Mount Holly in southeastern Rutland County and flows southwardly through southwestern Windsor County into Windham County, where it turns southeastwardly. Along its course it flows through or along the boundaries of the towns of Weston, Londonderry, Jamaica, Townshend, Brookline, Newfane (where it collects the Rock River), and Dummerston to Brattleboro, where it flows into the Connecticut River.

All content from Kiddle encyclopedia articles (including the article images and facts) can be freely used under Attribution-ShareAlike license, unless stated otherwise. Cite this article:
West River (Vermont) Facts for Kids. Kiddle Encyclopedia.