Dummerston is a town in Windham County, Vermont, United States. The population was 1,915 at the 2000 census. It is home to the longest covered bridge still in use in Vermont. Its borders include three main villages: Dummerston Center, West Dummerston, and East Dummerston. 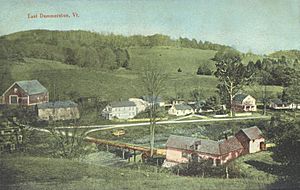 Dummerston was part of the Equivalent lands, part of a large tract of land given to settlers at the turn of the century. It lies on a tract given to the Connecticut Colony about 1715 by the Province of Massachusetts Bay as compensation for land mistakenly awarded by the latter to its settlers. In 1716, the town was auctioned to a consortium (which included William Dummer, lieutenant governor of Massachusetts), and named Dummerston. On December 26, 1753, the town was chartered as a New Hampshire grant and renamed Fulham by Governor Benning Wentworth. But when the grant was renegotiated, it reverted to Dummerston.

The many brooks and streams flowing into the West River provided the area with water power. Dummerston had five gristmills, five sawmills, one slate manufacturer, and one shop for making rakes. Raising sheep across the many hills was an important occupation. By 1859, the town had a population of 1,645. The Vermont Valley Railroad passed through Dummerston.

A house built in Dummerston in 1892, Naulakha, was home to author Rudyard Kipling. This is where he wrote several of his novels, including The Jungle Books and Captains Courageous.

There was a covered bridge that was built in 1812, and it moved to Old Sturbridge Village in 1946.

The town is crossed by Interstate 91, U. S. Route 5 and Vermont Route 30. It is bordered by Brattleboro to the south, Marlboro and Newfane to the west, with Putney and Brookline to the north. Chesterfield, New Hampshire lies across the Connecticut River from it.

There were 796 households out of which 31.8% had children under the age of 18 living with them, 58.0% were married couples living together, 6.8% had a female householder with no husband present, and 31.7% were non-families. Of all households 25.4% were made up of individuals and 6.9% had someone living alone who was 65 years of age or older. The average household size was 2.41 and the average family size was 2.89. 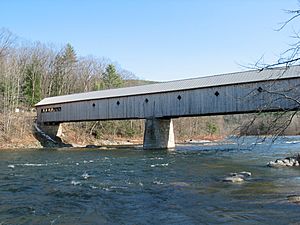 Dummerston has several interesting sites within its borders.

The longest covered bridge that is still in use in the state of Vermont is the West Dummerston Covered Bridge. Built in two spans which rest on a central pier, the bridge boasts a combined length of 267 feet along the floor. The gable ends overhang the floor at each end of the bridge by two feet; therefore, along the top of the trusses, the bridge is 271 feet long.

Dummerston is home to the 1,009 acre Black Mountain Conservation Area. Black Mountain rises abruptly from the West River into a horseshoe-shaped ridge. The mountain has a summit of 1,280 feet.

Author Rudyard Kipling made Dummerston home, building a house that he named Naulakha. It was there that he wrote his famous story, The Jungle Book, and invented the sport of Snow Golf. Naulakha is now a museum available for overnight stays. The house is a National Historic Landmark.

All content from Kiddle encyclopedia articles (including the article images and facts) can be freely used under Attribution-ShareAlike license, unless stated otherwise. Cite this article:
Dummerston, Vermont Facts for Kids. Kiddle Encyclopedia.