Newfane is the shire town (county seat) of Windham County, Vermont, United States. The population was 1,726 at the 2010 census. The town includes the villages of Newfane, Williamsville and South Newfane.

One of the New Hampshire grants, it was chartered on June 19, 1753 by Governor Benning Wentworth, who named it Fane after John Fane, the 7th Earl of Westmoreland. But hostilities during the French and Indian War prevented its settlement. Because a first town meeting was not held within the required five years, the charter was deemed null and void. So Wentworth issued an entirely new charter on November 3, 1761 as New Fane. The town was settled in 1766 by families from Worcester County, Massachusetts. Newfane became the shire town of the county before 1812. Atop Newfane Hill, they built a village, including the county buildings. Because of winter travel difficulties, however, it was relocated to the flatland below in 1825, until 1882 called Fayetteville after the Marquis de Lafayette.

The town has a diversified terrain, with both high hills and deep valleys. Farmers found good soil for cultivation on the intervales, and for grazing livestock on the uplands. Various streams provided water power for mills, and by 1859 industries included manufacturers of both leather and linseed oil, two flour mills, two lumber mills, and a large carriage factory. As a result, Newfane became prosperous during the 19th-century, when it built the Federal, Greek Revival and Victorian architecture that today makes it a favorite tourist destination.

Newfane is crossed by Vermont Route 30.

There were 693 households out of which 31.3% had children under the age of 18 living with them, 57.1% were married couples living together, 6.3% had a female householder with no husband present, and 33.0% were non-families. 24.1% of all households were made up of individuals and 7.8% had someone living alone who was 65 years of age or older. The average household size was 2.42 and the average family size was 2.88. 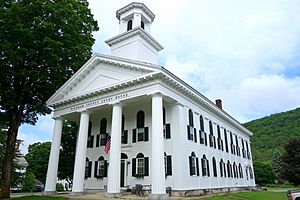 In 2006, Newfane became one of the first American towns to have its citizens pass a resolution endorsing the impeachment of President George W. Bush.

In H.P. Lovecraft's "The Whisperer in Darkness", the protagonist is driven through Newfane on his way to Townshend.

This climatic region is typified by large seasonal temperature differences, with warm to hot (and often humid) summers and cold (sometimes severely cold) winters. According to the Köppen Climate Classification system, Newfane has a humid continental climate, abbreviated "Dfb" on climate maps.

All content from Kiddle encyclopedia articles (including the article images and facts) can be freely used under Attribution-ShareAlike license, unless stated otherwise. Cite this article:
Newfane, Vermont Facts for Kids. Kiddle Encyclopedia.