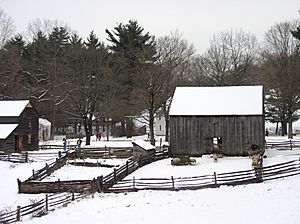 View of the Fenno House and barn at Old Sturbridge Village

Old Sturbridge Village is a living museum located in Sturbridge, Massachusetts which recreates life in rural New England during the 1790s through 1830s. It is the largest living museum in New England, covering more than 200 acres (80 hectares). The Village includes 59 antique buildings, three water-powered mills, and a working farm. Third-person costumed interpreters demonstrate and interpret 19th-century arts, crafts, and agricultural work. The museum is popular among tourists and for educational field trips.

Prior to European colonization, the Nipmuck people inhabited the Quinebaug River. In the early 19th century, the land on which Old Sturbridge Village now stands was a farm owned by David Wight which included a sawmill, a gristmill, and a millpond. The millpond was dug in 1795 and still powers the mills today. In 1795, Wight's son went to Boston to conduct some business on behalf of his father. While in Boston, he bought tickets to the Harvard Lottery which was a fund-raising technique for Harvard College. He won $5,000 (equivalent to $67.9 thousand in today's dollars).2018 He gave his father money to pay off the mortgage on his farm and logged the timber of the cedar swamp which today is the millpond. After the logging was complete, they dug the pond with a team of oxen and a scoop. This entire process took two and a half years.

George Washington Wells started a small spectacle shop in Southbridge, Massachusetts in the 1840s which became the American Optical Company. His sons Channing, Albert (called "AB"), and Cheney followed him into the business, which continued to expand. In 1926, AB began to shop for antiques, and this influenced Cheney to collect early American timepieces and Channing to collect fine furniture. By the early 1930s, AB had more than 45 rooms full of antiques in his Southbridge home.

The Wells family and others formed the Wells Historical Museum in 1935, gave it title to the various collections, and charged it with the care and exhibition of the artifacts. In July 1936, the Museum's trustees met to determine how the collections would best be presented to the public. AB wanted to create a small cluster of buildings in a horseshoe around a common, but his son George B proposed creating a live village with operating shops and a source of water power. Within a week of the meeting, the Museum purchased David Wight's farm and soon after hired Malcolm Watkins as the first curator of the museum, which they called Quinnebaug Village in honor of the river. Architect Arthur Shurcliff was called in to help lay out a suitable country landscape. By 1941, the Fitch House, the Miner Grant Store, and the Richardson House (now the Parsonage) were on the common and the Gristmill was in operation.

After a pause for World War II, George B.'s wife Ruth became acting director of the Village. They changed its name to Old Sturbridge Village and opened it on June 8, 1946. Attendance climbed, mostly through word of mouth. In a 1950 article in The Saturday Evening Post, the village was featured as "The Town That Wants to be Out of Date". By 1955, it acquired the Meetinghouse from the Fiskdale neighborhood of Sturbridge, the Salem Towne House from Charlton, Massachusetts, the Fenno House, the Friends Meetinghouse, the Pliny Freeman House, the Printing Office, and the District School.

On August 18, 1955, gale-force winds and a torrential downpour from Hurricane Diane created flood waters that broke dams in surrounding towns and flooded the Village, stranding 15 staff members. The Freeman Farmhouse was flooded and the Covered Bridge was swept off its foundation. Helicopters kept staff members supplied for three days until the waters receded. The damage was estimated to be $250,000 in 1955 dollars, but Village employees managed to re-open the Village in just nine days.

Old Sturbridge Village has more than 40 structures, including restored buildings purchased and relocated from around New England, as well as some authentic reconstructions, and the entire village is divided into three main sections. The Center Village represents the center of town, with the town green as its focal point. Countryside consists of outlying farms and shops. The Mill Neighborhood features various commercial structures that rely upon the millpond for their power.

The Village is a popular wedding location.

Appearances in TV and film

Old Sturbridge Village has been used as a set in many historical movies, TV shows, and documentaries, including Hawaii (1966) starring Julie Andrews, Glory (1989), and Slavery and the Making of America (2005).

In July, 2017, Old Sturbridge Village CEO Jim Donohue, who had previously founded the first charter school in Rhode Island, announced the opening of Old Sturbridge Academy Charter School, which would open in modular classrooms on the museum's premises the following fall.

All content from Kiddle encyclopedia articles (including the article images and facts) can be freely used under Attribution-ShareAlike license, unless stated otherwise. Cite this article:
Old Sturbridge Village Facts for Kids. Kiddle Encyclopedia.