The Town of Southbridge has a city form of government with a city council legislative body, but via a statute calls itself a Town. It is located in Worcester County, Massachusetts, United States. The population was 16,719 at the 2010 census. Southbridge is one of fourteen Massachusetts municipalities that have applied for, and been granted, city forms of government but wish to retain "The town of” in their official names. 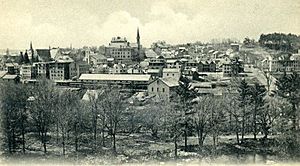 The area was initially inhabited by the Nipmuck and Mohegan tribes, with the Quinebaug River dividing their territories. As early as 1638, John Winthrop, Jr. purchased Tantiusques a tract for mining lead centered at what is now Leadmine Road in Sturbridge (it was thought at the time that where there was lead, there should be silver nearby). In fact the mineral deposit was graphite which the Winthrops commercialized employing Nipmuck miners.

Southbridge was first settled by Europeans in 1730. In 1801 a poll parish, named the Second Religious Society of Charlton, and popularly called Honest Town, was formed from the west part of Dudley, the southwest part of Charlton and the southeast part of Sturbridge. In 1816 this parish was incorporated to become the township of Southbridge. Among the first settlers was Moses Marcy, who owned a home on the site of what is now Notre Dame church and was elected to Congress, and the Dennison family. Water power from the Quinebaug River made Southbridge a good location for sawmills and gristmills in the 18th century, and textile mills in the 19th century. After the Civil War, many immigrants of Irish and French Canadian descent came to work and live there; by the 1930s they had been joined by Poles, Greeks, Italians and others.

Southbridge has a long history of manufacturing optical products, earning it the unofficial title "Eye of the Commonwealth", in reference to the Commonwealth of Massachusetts. Under the Wells family, the American Optical Company ("AO") became the world's largest manufacturer of ophthalmic products, and at its height employed more than 6,000 people around the world. Many of its workers were exempted from the draft during World War II since they were doing vital defense work, including making Norden bombsights and even some work on the atomic bomb.

By the early 1960s, the mill town had a movie theatre, an AM radio station (WESO), and an airport. New immigrants from Puerto Rico, Laos, and Vietnam began arriving in the 1970s and 1980s, and the town now has a significant Hispanic and Puerto Rican population. The American Optical Company shut down in 1984, and Southbridge is still struggling from the loss of these and other manufacturing jobs.

The principal road in Southbridge is Route 131, known as Main Street through downtown and East Main Street past the "AO Rotary" and through Sandersdale, a village on the town's east side. North-south roads include Eastford Road and Elm Street (Route 198), and Worcester Street-Mechanic Street-North Woodstock Road (Route 169).

There were 7,077 households out of which 31.1% had children under the age of 18 living with them, 43.6% were married couples living together, 15.5% had a female householder with no husband present, and 36.1% were non-families. 29.7% of all households were made up of individuals and 12.1% had someone living alone who was 65 years of age or older. The average household size was 2.41 and the average family size was 2.98.

The Jacob Edwards Library is the public library for the town of Southbridge. It is a member of Central Massachusetts Regional Library System (CMRLS) and C/W MARS.

Southbridge is served by Southbridge Municipal Airport(3B0), a public owned airport managed through a contract with Jim's Flying Service. Runway 02/20 has a 3501 x 75 feet asphalt surface.

All content from Kiddle encyclopedia articles (including the article images and facts) can be freely used under Attribution-ShareAlike license, unless stated otherwise. Cite this article:
Southbridge, Massachusetts Facts for Kids. Kiddle Encyclopedia.