Captains Courageous is an 1897 novel, by Rudyard Kipling, that follows the adventures of fifteen-year-old Harvey Cheyne Jr., the spoiled son of a railroad tycoon, after he is saved from drowning by a Portuguese fisherman in the north Atlantic. The novel originally appeared as a serialisation in McClure's, beginning with the November 1896 edition with the last instalment appearing in May 1897. In that year it was then published in its entirety as a novel, first in the United States by Doubleday, and a month later in the United Kingdom by Macmillan. It is Kipling's only novel set entirely in America. In 1900, Teddy Roosevelt extolled the book in his essay "What We Can Expect of the American Boy," praising Kipling for describing "in the liveliest way just what a boy should be and do."

The book's title comes from the ballad "Mary Ambree", which starts, "When captains courageous, whom death could not daunt". Kipling had previously used the same title for an article on businessmen as the new adventurers, published in The Times of 23 November 1892. 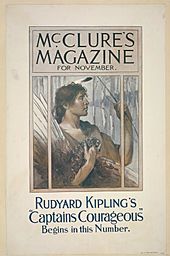 Cover of the November 1896 edition of McClure's, which began the serialisation of the novel. 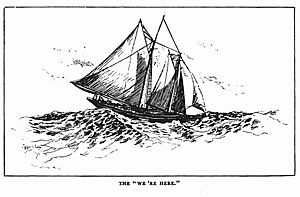 Protagonist Harvey Cheyne Jr., is the son of a wealthy railroad magnate and his wife, in San Diego, California. Washed overboard from a transatlantic steamship and rescued by the crew of the fishing schooner We're Here off the Grand Banks of Newfoundland, Harvey can neither persuade them to take him quickly to port, nor convince them of his wealth. Harvey accuses the captain, Disko Troop, of taking his money (which is later revealed to be on the deck from which Harvey fell). Troop bloodies his nose but takes him in as a boy on the crew until they return to port. Harvey comes to accept his situation.

Through a series of trials and adventures, Harvey, with the help of the captain's son Dan Troop, becomes acclimated to the fishing lifestyle, and even skillful. Great stories of the cod fishery with references to New England whaling and 19th-century steam and sailing are intertwined with the We're Here's adventures during a season at sea. Eventually, the We're Here returns to port and Harvey wires his parents, who immediately hasten to Boston, Massachusetts, and thence to the fishing town of Gloucester to recover him. There, Harvey's mother rewards the seaman Manuel, who initially rescued her son; Harvey's father hires Dan to work on his prestigious tea clipper fleet; and Harvey goes to Stanford to prepare for taking over his father's shipping lines.

The book was written during Kipling's time living in Brattleboro, Vermont. Kipling recalled in his autobiography:

Now our Dr. [James] Conland had served in [the Gloucester] fleet when he was young. One thing leading to another, as happens in this world, I embarked on a little book which was called Captains Courageous. My part was the writing; his the details. This book took us (he rejoicing to escape from the dread respectability of our little town) to the shore-front, and the old T-wharf of Boston Harbour, and to queer meals in sailors’ eating-houses, where he renewed his youth among ex-shipmates or their kin. We assisted hospitable tug-masters to help haul three- and four-stick schooners of Pocahontas coal all round the harbour; we boarded every craft that looked as if she might be useful, and we delighted ourselves to the limit of delight. ... Old tales, too, he dug up, and the lists of dead and gone schooners whom he had loved, and I revelled in profligate abundance of detail—not necessarily for publication but for the joy of it. ...I wanted to see if I could catch and hold something of a rather beautiful localised American atmosphere that was already beginning to fade. Thanks to Conland I came near this.

When, at the end of my tale, I desired that some of my characters should pass from San Francisco to New York in record time, and wrote to a railway magnate of my acquaintance asking what he himself would do, that most excellent man sent a fully worked-out time-table, with watering halts, changes of engine, mileage, track conditions and climates, so that a corpse could not have gone wrong in the schedule.

The resulting account, in Chapter 9, of the Cheynes' journey from San Diego to Boston, is a classic of railway literature. The couple travel in the Cheynes' private rail car, the "Constance", and are taken from San Diego to Chicago as a special train, hauled by sixteen locomotives in succession. It takes precedence over 177 other trains. "Two and one-half minutes would be allowed for changing engines; three for watering and two for coaling". The "Constance" is attached to the scheduled express "New York Limited" to Buffalo, New York and then transferred to the New York Central for the trip across the state to Albany. Switched to the Boston and Albany Railroad, the Cheynes complete the trip to Boston in their private car, with the entire cross-country run taking 87 hours 35 minutes.

My characters arrived triumphantly; and, then, a real live railway magnate was so moved after reading the book that he called out his engines and called out his men, hitched up his own private car, and set himself to beat my time on paper over the identical route, and succeeded.

Disko Troop claims to receive his given name for his birth on board his father's ship near Disko Island on the west coast of Greenland. His crewman 'Long Jack' once calls him "Discobolus".

Film, TV, theatrical, or other adaptations

Captains Courageous has been adapted for film three times:

All content from Kiddle encyclopedia articles (including the article images and facts) can be freely used under Attribution-ShareAlike license, unless stated otherwise. Cite this article:
Captains Courageous Facts for Kids. Kiddle Encyclopedia.