Marlboro is a town in Windham County, Vermont, United States. The population was 978 at the 2000 census. The town is home to both the Southern Vermont Natural History Museum and Marlboro College, which hosts the Marlboro Music School and Festival each summer.

Named "New Marlborough" for the Duke of Marlborough until 1800, the town was a New Hampshire grant chartered on April 29, 1751 to Timothy Dwight and 64 others from Northampton, Massachusetts and vicinity. The French and Indian War prevented settlement, so the first charter was forfeited and a new one issued by Governor Benning Wentworth on September 21, 1761, then again on April 17, 1764 as New Marlborough. The town was surveyed in 1762, and 64 equal "rights" (divisions) were created, with four lots in the center of town excepted. First settled in 1763, the town grew rapidly between 1764 and 1770 with emigrants from Massachusetts and Connecticut. By 1799 there were 313 children registered in the town's schools.

The town's population peaked in 1820 with 1300 people, the subsequent decline caused by immigration to the west and a downturn in the area's economy. Although the terrain is mountainous, the soil is rich and deep, which allowed farmers to grow good crops. When the population was 896 in 1859, the community was almost exclusively agricultural. 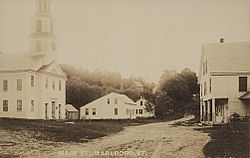 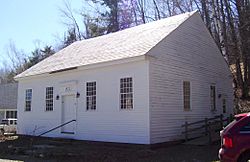 The Town House, used for town meetings, was built in 1822, and later moved to its current location

Located on the Town Common are the Town House (1822), used for town meetings, the Town Offices and Post Office building (1969), the Marlboro Meeting House Congregational Church (1931), and the Whetstone Inn (c.1775).

The town's first church was organized in 1776, and put up at the top of Town Hill in 1778. In 1820, it was replaced by a newer structure nearby, and timbers and board from the old church were used in 1822 to build the Town House, which was also located in the vicinity. Between 1836 and 1844 both of these buildings – the church and the Town House – were moved down the hill to about their current locations on the Town Common. The church burned down in 1931 was replaced by the current one, which is roughly a reproduction of its predecessor, except slightly smaller.

After the move down the hill, Town House was on the east side of South Road, but when it was hit by a new, oversized snow plow in 1966, it was moved across the road to its current location.

The Whetstone Inn was built around 1775 by Deacon Jonas Whitney, who arrived in Marlboro in 1773. Over its history, it has been various used as a courthouse, church, tavern, dance hall and post office.

In 1946, Marlboro College was founded on the site of three farms by Walter Hendricks, for returning World War II veterans, with poet Robert Frost as its first trustee. The Marlboro Music School and Festival, founded in 1951, is headquartered on the campus.

In 2006, Marlboro was one of the first American towns to have its citizens pass a resolution endorsing the impeachment of President George W. Bush, and in 2011 it was one of thirteen Vermont towns isolated by flooding caused by Hurricane Irene.

The town is crossed by Vermont Route 9, also known as the "Molly Stark Trail".

There were 330 households, out of which 30.6% had children under the age of 18 living with them, 55.8% were married couples living together, 6.1% had a female householder with no husband present, and 34.8% were non-families. 25.5% of all households were made up of individuals, and 10.0% had someone living alone who was 65 years of age or older. The average household size was 2.39 and the average family size was 2.90. 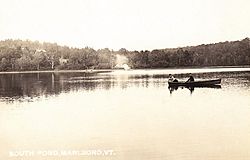 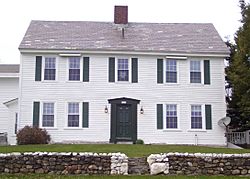 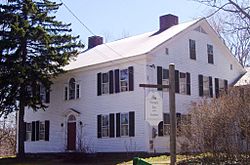 The Whetstone Inn, on the Town Common, was built c.1775

Students from kindergarten to eighth grade attend Marlboro School, which replaced a number of one-room schoolhouses in 1954.

All content from Kiddle encyclopedia articles (including the article images and facts) can be freely used under Attribution-ShareAlike license, unless stated otherwise. Cite this article:
Marlboro, Vermont Facts for Kids. Kiddle Encyclopedia.