The American Heritage Rivers Protection Program was created by an Executive Order, Number 13061, signed by President Bill Clinton on September 11, 1997. Selection criteria were developed under the Chair of the Council on Environmental Quality (CEQ), with wide government and expert involvement, and reflected a wide variety of viewpoints, including those representing natural, cultural, and historic resources; scenic, environmental, and recreation interests; tourism, transportation, and economic development interests; and industries such as agriculture, hydropower, manufacturing, mining, and forest management. The recommended rivers were to represent a variety of stream sizes, diverse geographical locations, and a wide range of settings from urban to rural and ensure that relatively pristine, successful revitalization efforts were considered, as well as degraded rivers in need of restoration.

Rivers were selected for designation according to the following criteria: 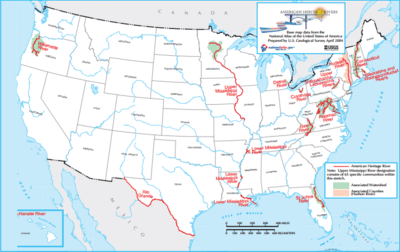 Map of the Rivers

All content from Kiddle encyclopedia articles (including the article images and facts) can be freely used under Attribution-ShareAlike license, unless stated otherwise. Cite this article:
American Heritage Rivers Facts for Kids. Kiddle Encyclopedia.