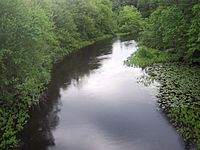 The Woonasquatucket River below Stillwater Reservoir in Smithfield

The Woonasquatucket River in the Olneyville neighborhood of Providence 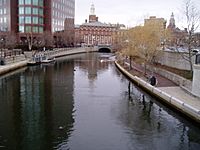 The Woonasquatucket River (pronounced Algonquian for "where the salt water ends") is a river in the U.S. state of Rhode Island. It flows approximately 15.8 miles (25.4 km) and drains a watershed of 130 km2 (50 sq mi).

Together with the Blackstone River to the north, the Woonasquatucket was designated an American Heritage River in 1998. Both rivers played active roles in the industrial revolution and the history of Rhode Island in the 19th century. Evidence of this industrial history remains in the fact that there are 18 dams along the river's length.

The river begins in the swamps west of Primrose Pond in North Smithfield and runs southeast past Primrose Pond to Stillwater Reservoir. Below the reservoir, the river continues southeast, providing water to numerous ponds, until going under Providence Place mall and joining the Moshassuck River in front of the One Citizens Plaza building in downtown Providence to form the Providence River. The lower part of the river, below Rising Sun Dam in Olneyville is tidal.

Below is a list of all crossings over the Woonasquatucket River. The list starts at the headwaters and goes downstream. 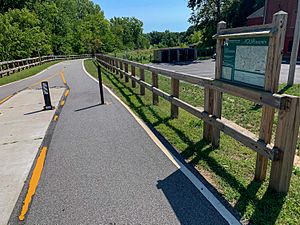 The river was an important transportation route for native peoples, especially for connecting various tribes of the Algonquian nation to what is now the Providence River and the Atlantic Ocean beyond. The area now known as Federal Hill in Providence was an important meeting place along the river for bands of the Narragansett and Wampanoag tribes. Known as Nocabulabet (pronounced "nok-a-BUL-a-bet"; thought to be an early settlers version of an Algonquian phrase meaning "hill above the river" or "place between the ancient waters"), this was a place where tribes gathered for trading and harvest festivals. Some believe it was also used as a vantage point to watch for marauding tribes approaching from Narragansett Bay.

In addition to many unnamed tributaries, the following brooks and rivers feed the Woonasquatucket:

All content from Kiddle encyclopedia articles (including the article images and facts) can be freely used under Attribution-ShareAlike license, unless stated otherwise. Cite this article:
Woonasquatucket River Facts for Kids. Kiddle Encyclopedia.