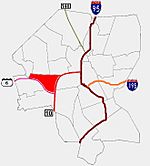 Providence neighborhoods with Olneyville in red

Olneyville is a neighborhood in Providence, Rhode Island bordered by Atwells Avenue to the north, U.S. Route 6 to the south and Rhode Island Route 10 to the east. The Woonasquatucket River runs through the southern portion of the neighborhood. The area is roughly triangular. 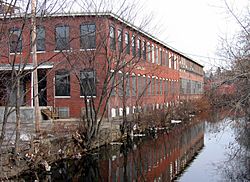 The Woonasquatucket River in the Olneyville neighborhood of Providence, Rhode Island

Settlement in Olneyville began at Olneyville Square in the early 18th century. The area began as a center of trade with a nearby Narragansett village. Larger settlement began in 1785 after Christopher Olney, for whom Olneyville is named, founded a grist mill and a paper mill on a wide part of the Woonasquatucket River. Olney was a captain during the Revolutionary War and owned a 95 acre farm in the area. By the end of the American Revolutionary War, a forge and foundry and other small industries operated in Olneyville.

Through the mid-19th century, Olneyville developed as a railroad junction and mill district. This attracted many Polish immigrants. However, the mill industries declined after World War II causing economic decline. The construction of the Route 6 connector in the 1950s exacerbated these problems. In the two decades that followed Olneyville witnessed a substantial drop in its population.

On May 15, 1900, Olneyville was the site of one of the few occasions of "raining fish", when a late afternoon thunderstorm brought perch and bullspouts falling from the skies.

Former warehouses and mill buildings in Olneyville were home to a number of artist collectives including Fort Thunder in the 1990s. Since 2000, many of these buildings have been purchased by developers who plan to convert them into luxury condominiums.

However, proposals to develop the Olneyville area have met some local opposition, caused by fears of gentrification. In March 2007, the Olneyville Neighborhood Association (ONA) declared its opposition to plans from the United Way to move their headquarters from the East Side to Calender Mills in Olneyville.

Today, according to the Providence Plan, a local nonprofit aimed at improving city life, 57.4% of residents are Hispanic, 22% white, 13.6% African-American, 7.4% Asian, and 1.6% Native American. 63% of public school children speak a language other than English as their primary language.

The median family income is $19,046, well below the city-wide average of $32,058. 41.1% of families live in poverty while nearly one in four families receives some form of public assistance. One in five children has been exposed to high levels of lead.

The Hot wiener is a Rhode Island specialty food created in 1927 at the still operating, New York System on Smith Street (U.S. Rt. 44) in the nearby Smith Hill neighborhood, however the Olneyville New York System, in Olneyville, is often cited as the "definitive" or "quintessential" vendor and dates to its opening by Greek immigrant Anthony Stevens in 1946.

All content from Kiddle encyclopedia articles (including the article images and facts) can be freely used under Attribution-ShareAlike license, unless stated otherwise. Cite this article:
Olneyville, Providence, Rhode Island Facts for Kids. Kiddle Encyclopedia.