North Smithfield is a town in Providence County, Rhode Island, United States, settled as a farming community in 1666 and incorporated into its present form in 1871. North Smithfield includes the historic villages of Forestdale, Primrose, Waterford, Branch Village, Union Village, Park Square, and Slatersville. The population was 11,967 at the 2010 census.

According to the United States Census Bureau, the town has a total area of 24.7 square miles (64 km2), of which, 24.0 square miles (62 km2) of it is land and 0.7 square miles (1.8 km2) of it (2.83%) is water. North Smithfield is in a New England upland region. The Branch River and Blackstone Rivers provided much of the power for the early mills in the town.

In the 17th century British colonists settled in North Smithfield developing a farming community that they named after Smithfield, London in England. The town was part of Smithfield, Rhode Island until it was incorporated as North Smithfield in 1871. The first colonization occurred after a Native American, "William Minnian, (or Quashawannamut) "of Punkkupage" (present day Canton, MA) of Massachusetts Bay on May 14, 1666, deeded approximately 2,000 acres" to John Mowry and Edward Inman who partnered with Nathaniel Mowry, John Steere, and Thomas Walling in dividing up the purchased tract. In the early 18th century, a Quaker colony developed in what is now North Smithfield (then Smithfield), which extended into south Uxbridge, Massachusetts.

Today North Smithfield is part of the John H. Chaffee Blackstone River Valley National Heritage Corridor. The Blackstone Valley is the oldest industrialized region in the U.S. A local North Smithfield industry today, Berroco Yarns, is a continuation of an original family owned woolen company first established in this valley by Daniel Day in 1809. 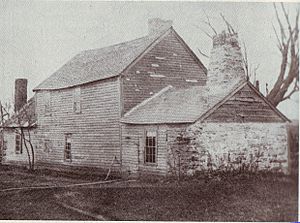 A rare "stone-ender" known as the John Mowry, Jr. or Sayles House on Wesquadomeset (Sayles) Hill near Iron Mine Hill and Sayles Hill Roads in North Smithfield, demolished in the 20th century

The village of Slatersville was largely built by Samuel Slater and his brother John Slater beginning in 1803. It is a well-preserved original New England mill village with worker housing and commercial buildings and a church on a village green. This village is in fact America's first planned industrial mill village. Samuel and John's family owned this mill and the village until the turn of the 20th century.

Union Village, along Rhode Island Route 146A achieved local prominence as an important stagecoach stop on the route along Great Road. Union Village was also home to a hat shop, taverns, an academy and the Union Bank from which the village got its name.

In the nineteenth and early twentieth-century, North Smithfield "was served by several trolley and railroad lines; now all are gone save one. A freight-only spur line of the Providence and Worcester Railroad extends from the main line in Woonsocket and terminates [in Slatersville] at the Providence Pike" where it "primarily serves a single customer, a steel supplier called Denman and Davis," a company in Slatersville which is now part of O’Neal Steel, Inc... 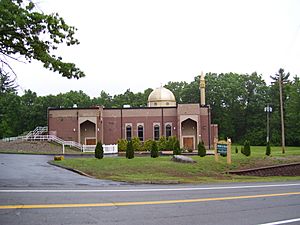 There were 3,954 households out of which 31.0% had children under the age of 18 living with them, 64.0% were married couples living together, 7.8% had a female householder with no husband present, and 25.2% were non-families. 21.3% of all households were made up of individuals and 12.4% had someone living alone who was 65 years of age or older. The average household size was 2.61 and the average family size was 3.05. 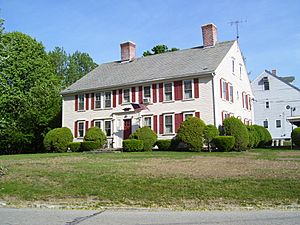 All content from Kiddle encyclopedia articles (including the article images and facts) can be freely used under Attribution-ShareAlike license, unless stated otherwise. Cite this article:
North Smithfield, Rhode Island Facts for Kids. Kiddle Encyclopedia.