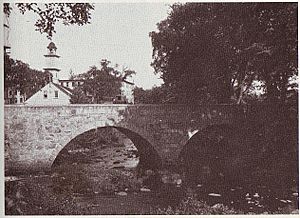 1921 photo of the Stone Arch Bridge over the Branch River and Slater mills in Slatersville, Rhode Island

The Branch River is a river in the U.S. state of Rhode Island. It flows for approximately 16 km (10 mi). There are six dams along the river's length. The river provided energy for many of the region's textile mills in the nineteenth century.

The river is formed in Burrillville by the confluence of the Clear and Chepachet rivers. From there, it flows north to North Smithfield, past Slatersville and Forestdale to the Blackstone River.

Below is a list of all crossings over the Branch River. The list starts at the headwaters and goes downstream.

Trout and Dawley Brooks are the Branch River's only named tributaries, though it has many unnamed streams that also feed it.

All content from Kiddle encyclopedia articles (including the article images and facts) can be freely used under Attribution-ShareAlike license, unless stated otherwise. Cite this article:
Branch River (Rhode Island) Facts for Kids. Kiddle Encyclopedia.