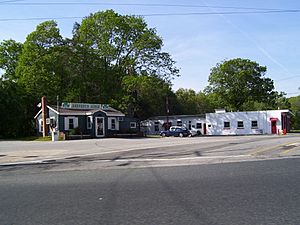 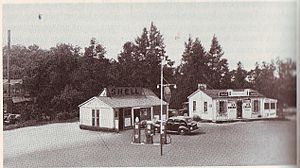 Branch Village is a village located on Rhode Island Route 146A ("Great Road") near the intersection of St. Paul Street in North Smithfield. The village takes its name from the Branch River which runs through it.

In 1795 Elisha Bartlett of Glocester built a scythe and tool mill in Branch Village powered by the river. After his death in 1805, the mill was expanded to manufacture cotton. Branch Village is home to restaurants, supermarkets, a fire station with an adjoining fire lookout tower, and other businesses.

All content from Kiddle encyclopedia articles (including the article images and facts) can be freely used under Attribution-ShareAlike license, unless stated otherwise. Cite this article:
Branch Village, Rhode Island Facts for Kids. Kiddle Encyclopedia.