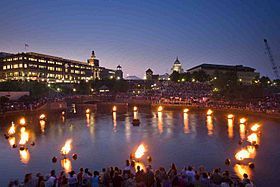 WaterFire is a sculpture by Barnaby Evans presented on the rivers of downtown Providence, RI. It was first created by Evans in 1994 to celebrate the tenth anniversary of First Night Providence, and has since become an annual public art phenomenon.

WaterFire is a free public art installation, a performance work, an urban festival, a civic ritual, and a spiritual communal ceremony. WaterFire's symbolism and interpretation is both inclusive and expansive - reflecting the recognition that individuals must act together to strengthen and preserve their community.

On WaterFire evenings, downtown Providence is transformed by eighty-six burning braziers (each with approximately 33 pieces of wood); some float just above the surface of the rivers that flow through Waterplace Park (the Woonasquatucket river) and the middle of downtown Providence (the Moshassuck and Providence rivers; others are mounted on the piers of former bridges. The public is invited to come and walk the riverfront and enjoy the beauty of the flickering firelight, the fragrant scent of aromatic wood smoke, the changing silhouettes of the volunteer firetenders, and the music from around the world. Average attendance is 40,000 a night, ranging from 10,000 to 100,000. WaterFire is held May through November, with lightings typically on Saturday evenings once or twice a month. The rivers are tidal, so events are normally scheduled to take place when sunset co-incides with an incoming high tide.

Through the support of dedicated volunteers, WaterFire returned as a seasonal event. WaterFire gained regional attention and a coordinated effort to fund the project began. In 1997, WaterFire expanded to 42 braziers, and had an estimated attendance of 350,000 people over the entire season. Evans received The Renaissance Award for his effort to revitalize downtown Providence, and WaterFire became the symbol of the city's renaissance.

For the 1998 installation, WaterFire expanded to include 81 fires, with expansions up the Moshassuck River and into the basin at Waterplace Park. WaterFire now enjoys national and international renown.

All content from Kiddle encyclopedia articles (including the article images and facts) can be freely used under Attribution-ShareAlike license, unless stated otherwise. Cite this article:
WaterFire Facts for Kids. Kiddle Encyclopedia.