Federal Hill is a neighborhood in Providence, Rhode Island. It lies immediately west of the city's Downtown, across Interstate 95. Since the late 19th century, Federal Hill has been an enclave of Providence's Italian American community; today the neighborhood is known as Providence's Little Italy and is noted for its abundance of Italian restaurants, markets, and cultural establishments.

Federal Hill is bounded by Westminster Street to the south, Route 6 and Route 10 to the west and north, and Interstate 95 to the east. The area borders Downtown to the east, Smith Hill and Valley to the north, Olneyville to the west, and the West End and South Providence to the south. 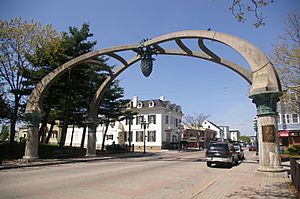 Gateway arch over Atwells Avenue. La Pigna sculpture, a traditional symbol of welcome, abundance and quality, hangs from the center. 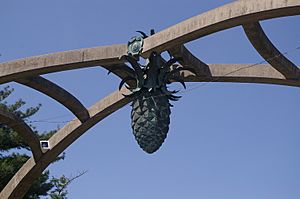 Atwells Avenue is the cultural centerpiece of the neighborhood, with many famous restaurants densely clustered along it between Interstate 95 and Harris Avenue. It also contains a mix of other typical urban businesses such as sandwich and pizza shops, convenience stores, a hotel, and tattoo parlors. The gateway arch over Atwells Avenue near Downtown is one of the most recognizable landmarks in Providence. The La Pigna (or The Pine Cone) sculpture hanging from its center — a traditional Italian symbol of welcome, abundance, and quality — is often mistakenly referred to as "The Pineapple" and has become the symbol of Federal Hill. Other important streets in the neighborhood include Broadway, home primarily to professional, medical and legal offices, but also to the historic Columbus Theater now used for movies and live performances. Other than a commercial and warehouse section in the area of Dean and Washington Streets, most of the rest of the neighborhood is residential, often catering to college students. Johnson and Wales University maintains the Renaissance Hall dormitory on Federal Hill as well.

Most cross streets in the historic neighborhood between Atwells Avenue and Broadway are one-way due to their narrowness. A few streets remain paved with cobblestone. 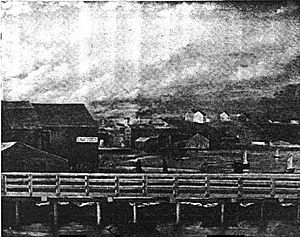 Federal Hill received its name after a 1788 Fourth of July ox roast celebration on the plain adjacent to the hill. The organizers of the celebration intended to celebrate the ratification of the Federal Constitution by the 9 of the 13 states needed to create the United States. Because anti-federalist sentiment was strong in Rhode Island, General William West led 1,000 armed farmers to Providence to stop the celebration. Eventually, a compromise was reached and the celebrants agreed to celebrate Independence Day only and not the ratification of the Federal Constitution. The issue remained hotly controversial in Rhode Island for two more years until the state finally became the last of the original thirteen states to join the union.

The area of Federal Hill was originally called Nocabulabet, believed to be an anglicized version of either a Narragansett or Wampanoag phrase meaning "land above the river" or "land between the ancient waters."

Federal Hill's Atwells Avenue is named for Amos Maine Atwell, who led a syndicate of businessmen developing the western areas of the city in 1788. The area developed into a working class area during the early 19th century in part due to reverses in commercial shipping.

In 1840, only the lower streets of the hill were occupied, and that mostly by Irish immigrants who worked in the nearby textile shops and foundries. Yet, by the early 1850s, the part of Atwells Avenue that we think of today as "LIttle Italy" was clustered with two and three story tenements that housed the large influx of those who fled the famine of 1845 to 1851. A third of these people came from the Barony of Truagh and surrounding townlands. This area, encompassing Northern County Monaghan and Southern County Tyrone, had for centuries been the fiefdom of the McKenna clan. Not incidentally, McKenna was, by far, the most common name on Federal Hill in the 1860s.

The 1870s saw the first arrival of immigrants from southern Italy, with greater numbers arriving in the next two decades. By 1895, the Hill was divided almost evenly between Irish and Italians. These were tension-filled times, as both groups fought for jobs and respect from the Yankee majority.

More can be read about the Irish period on the Hill at http://federalhillirish.com/.

In 1954, Raymond Loreda Salvatore Patriarca, Sr made drastic changes in the family, the biggest being moving the family's base of operations to Providence, Rhode Island. He ran his family from the National Cigarette Service Company and Coin-O-Matic Distributors, a vending machine and pinball business on Atwells Avenue in the Federal Hill neighborhood of Providence. The business was known to family members as "The Office." 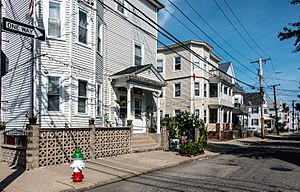 According to the Providence Plan, a local nonprofit aimed at improving city life, 47% of residents are white, 32.1% Hispanic, and 14.8% are African-American. These are all slightly above the citywide averages. Nearly 50% of public school children speak a language other than English as their primary language.

The median family income is $27,288, below the citywide average of $32,058. 28% of families live below the poverty line with 10% of residents receiving some form of public assistance.

One in four children has been exposed to unsafe levels of lead.

Another large green space is Franciscan Park, a two and a half acre park, located off Broadway near Route 6.

Also, the Spruce Street Bocce Courts on the northwest corner of Spruce and Dean streets has benches and two lighted bocce courts and serves as the home of several local bocce leagues, the largest being the popular Nocabulabet Bocce League which hosts games on Wednesday nights during its spring and fall seasons.

Federal Hill is often characterized by its culinary reputation. Atwells Avenue has over twenty restaurants within a quarter mile section, such as Angelo's Civita Farnese. The area's proximity to Johnson and Wales University has allowed Providence to attract and retain skilled chefs, many of whom work in the many restaurants on Atwells Avenue.

Federal Hill plays a central role in the story "The Haunter of the Dark" by Providence-born writer H.P. Lovecraft. It is the site of a church which in the story was used by a sect called the Church of Starry Wisdom for their services, and houses the Shining Trapezohedron and the 'Haunter' itself - a creature summoned from time and space and said to be an avatar of Nyarlathotep. The church that figures prominently in the story was based on St. John's Church, an actual church on Atwells Avenue that was built in 1873 and demolished in 1992. It was, in Lovecraft's day, the principal Catholic church in the area. The description of the interior and belfry of the church is quite accurate.

All content from Kiddle encyclopedia articles (including the article images and facts) can be freely used under Attribution-ShareAlike license, unless stated otherwise. Cite this article:
Federal Hill, Providence, Rhode Island Facts for Kids. Kiddle Encyclopedia.