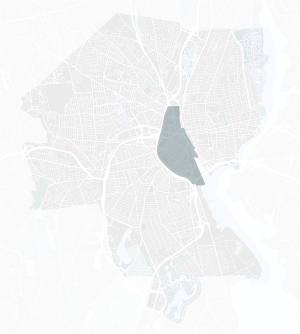 Downtown is the central economic, political, and cultural district of the city of Providence, Rhode Island. It is bounded on the east by Canal Street and the Providence River, to the north by Smith Street, to the west by Interstate 95, and to the south by Henderson Street. The highway serves as a physical barrier between the city's commercial core and neighborhoods of Federal Hill, West End, and Upper South Providence. Most of the downtown is listed on the National Register of Historic Places as the Downtown Providence Historic District.

Originally known as 'Weybossett Neck' or 'Weybossett Side,' Downtown was first settled by religious dissidents from the First Congregational Society in 1746. Their settlement was located near present-day Westminster Street.

Downtown did not witness substantial development until the early 19th century, when Providence began to compete with Newport, Rhode Island. British forces had destroyed much of Newport during the American War for Independence, making the city's merchants vulnerable to competition from Providence. This prevented the development of a commercial district along the western bank of the Providence River.

During the industrialization of the late 19th century, an ever-expanding railroad industry emanating from Union Station, eventually resulted in the complete paving over of the Great Salt Cove and the two branches of the Providence River. The result of decades of expansion was the isolation of the state capitol from the rest of downtown by an imposing mass of railroad tracks, often called locally the "Chinese Wall". As rail traffic dropped off, 75 percent by 1980, city planners saw an opportunity to open up central land for development and unify downtown with the Capitol. A new, smaller train station was built in 1986 a half mile north of its predecessor, and tracks were removed or routed underground.

The new land precipitated a massive remaking of the character of the city's downtown. From 1975 until 1982, under Mayor Vincent Cianci, Jr, $606 million of local and national Community Development funds from were invested. Roads were removed and the city's natural rivers were opened up and lined with a cobblestone-paved park called Waterplace Park in 1994, which is now host to popular WaterFire festivals. Private and public developments followed and the new area adjacent to the Capitol became known as Capitol Center.

In 2007, the Renaissance Providence Hotel opened in Masonic Temple building, which had been abandoned amidst the Great Depression a half century prior.

According to the Providence Plan, a local nonprofit aimed at improving city life, 64% of residents are white and 8.6% are Asian (both above the citywide averages of 54.4% and 6.2% respectively), 12% of the population is African-American, 11% is Hispanic, and 1% is Native American; 43% of public school children speak a language other than English as their primary language.

The median family income is $42,558, over $10,000 above the citywide average, but 14% of families live below the poverty line while nearly 3.7% receive some form of public assistance. A further problem is that 15% of children under the age of six have been exposed to high quantities of lead.

As part of the revitalization of Providence, the administrations of Mayors Vincent Cianci and David Cicilline have promoted Providence, especially Downtown, as an artistic center. WaterFire has become perhaps the most visible symbol of Providence's development into an artistic center. Waterfire is an environmental art event created by Barnaby Evans that includes bon fires, gondolas, and music. This event has become a major attraction for both Rhode Islanders and tourists.

Downtown is also home to AS220, a non-profit community arts center that includes fifty-three artist live/work studios, four galleries, a performance space, a black box theatre, a dance studio, a bar and restaurant, a makerspace consisting of a printshop, fab lab, media arts lab and darkroom, and a free after-school arts education program for youth.

Downtown Providence has numerous 19th-century mercantile buildings in the Federal and Victorian architectural styles, as well as several post-modern and modernist buildings that are located throughout this area. In particular, a fairly clear spatial separation appears between the areas of pre-1980s development and post-1980s development. Fountain Street and Exchange Terrace serve as rough boundaries between the two. 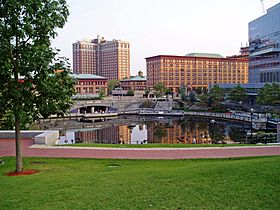 In addition, Veterans Memorial Park and Market Square, along the border between Downtown and College Hill, are sometimes counted as Downtown parks. 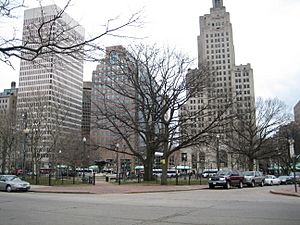 The historic part of downtown has many streetscapes that look as they did eighty years ago. Most of the state's tallest buildings are found in this area. The largest structure, to date, is the art-deco-styled 111 Westminster Street (formerly Industrial Trust Tower), at 426 feet (130 m). By contrast, nearby to it is the second tallest One Financial Center (Sovereign Bank Tower), designed in modern taut-skin cladding, constructed a half century later. In between the two is 50 Kennedy Plaza. The Textron Tower is another core building in the Providence skyline. Downtown is also the home of the Providence Biltmore hotel and the Westminster Arcade, the oldest enclosed shopping mall in the U.S., built in 1828.

Kennedy Plaza is a major business and transportation hub. Surrounding the plaza are Providence City Hall, Burnside Park, the Bank of America Building, One Financial Center, 50 Kennedy Plaza, Bank of America Ice Skating Rink, and the US District Court building. The plaza itself includes the central station for the Rhode Island Public Transit Authority (RIPTA) and a police substation. 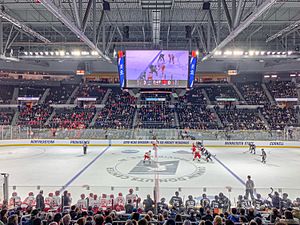 All content from Kiddle encyclopedia articles (including the article images and facts) can be freely used under Attribution-ShareAlike license, unless stated otherwise. Cite this article:
Downtown, Providence, Rhode Island Facts for Kids. Kiddle Encyclopedia.