Providence is a railroad station in Providence, Rhode Island, served by Amtrak and MBTA Commuter Rail. The station has four tracks and two island platforms for passenger service, with a fifth track passing through for Providence and Worcester Railroad freight trains. It is now the 11th busiest Amtrak station in the country, and the second-busiest on the MBTA Commuter Rail system outside of Boston.

The station was built in 1986 during a project to remove elevated tracks from downtown Providence. It is fully handicapped accessible for all trains. 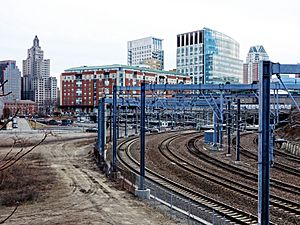 Tracks immediately north of the station

Two of Amtrak's passenger rail routes serve the station: the Acela Express and the Northeast Regional. The Acela Express is the United States' only high-speed rail service; the Regional is a slower local service. Both connect Providence with the Northeast Corridor from Boston to Washington D.C.

The Massachusetts Bay Transportation Authority (MBTA) also serves Providence. The Providence/Stoughton commuter rail line's southern terminus is located at Wickford Junction, two stops south of Providence. The Providence/Stoughton Line provides commuter service to towns between the airport, Providence and Boston, sharing track with Amtrak trains. In a 2018 count, Providence averaged 2,091 inbound MBTA passengers on weekdays, making it the second-busiest station on the system (after [[{{{station}}} (MBTA station)|{{{station}}}]]) outside of Boston 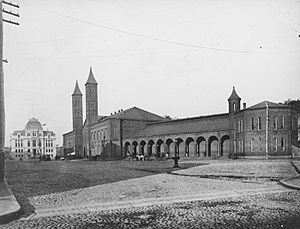 Union Station in 1885, eleven years before it was destroyed by fire 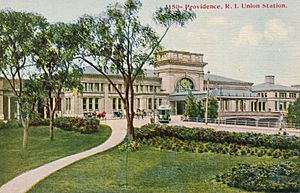 A postcard image of the 2nd Union Station, circa 1910

Providence's first railroad station was built in 1835 by the Boston and Providence Rail Road at India Point. The Providence and Stonington built a depot at Crary Street in South Providence in 1838, and the two were soon connected by a ferry service.

The first through service stopped at Union Station, a brick edifice built in 1847 by the Providence & Worcester, Providence & Stonington, and Boston & Providence Railroads. It was designed by 21-year-old architect Thomas Alexander Tefft. This building was lost to fire in 1896 and was replaced by a larger Union Station, completed in 1898 by the New Haven Railroad. It consisted of five large brick structures, which still form the northern side of Kennedy Plaza in the center of Downtown Providence.

In 1986, the Northeast Corridor through Providence was relocated north to free up land from a mass of elevated tracks, popularly called the "Chinese Wall," that had hemmed in downtown Providence. The new and smaller station was built across Gaspee Street from the Rhode Island State House. The five tracks and two platforms are located below ground level underneath the station building.

Amtrak has served Providence since its inception in 1971, with Northeast Corridor trains from Boston to New York and Washington. Local commuter service - both intrastate service and service to Boston - has been intermittent during this era. After Penn Central discontinued their New London to Boston commuter train in 1972, Rhode Island sponsored a short lived Westerly to Providence service (which lasted until 1979) in addition to the MBTA's Providence to Boston service. Sunday service ended in October 1977 and off-peak and Saturday service ended in April 1979 due to Rhode Island's limited subsidies; rush-hour service ceased on February 20, 1981. Rush hour commuter service began again (to the new station) in February 1988, with off-peak service added in December 2000 and weekend service added in July 2006. A new layover facility for MBTA commuter trains, located north of the station in Pawtucket, opened in 2006, allowing the MBTA to increase service to the city. Service was further extended to T.F. Green Airport in December 2010 and to Wickford Junction in April 2012.

Additionally, some game-day service to Foxboro has run from Providence since 1994, as well as a brief stint in 1971. Special trains run for New England Patriots football games as well as some New England Revolution soccer games and college sporting events.

The first revenue Acela Express service to Providence was on December 11, 2000, concurrent with the expansion of MBTA service.

In August 2019, the Federal Railroad Administration awarded RIDOT up to $12.5 million for a 'major rehabilitation' of the station. The $25 million project is also funded by RIDOT ($5.25 million) and Amtrak ($7.25 million). 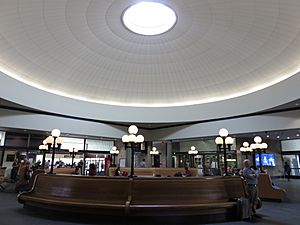 Interior of the station

The station was designed in the Washington, D.C. office of Skidmore, Owings and Merrill by Milo Meacham under the direction of Marilyn Jordan Taylor. It is a simple building in the brutalist style, with a large square clocktower. Although largely subterranean and lacking the grand scale that was possible in when Union Station was built in 1898, the station has been positively received by critics. The project received a citation in the 1983 Progressive Architecture Awards. Local architectural historian William McKenzie Woodward lauded the building for its aesthetics, calling its saucer dome "an obvious yet very gracious gesture toward the State House". In 2010, Architect praised the forethought of the designers in planning for the revitalization of Providence's downtown, saying that "[i]ts design accommodated the complex geometries of a circulation pattern oriented toward the Capitol and a structure aligned with the tracks, while its splayed plan opened out to what was then an imagined city, one that Providence eventually made happen." 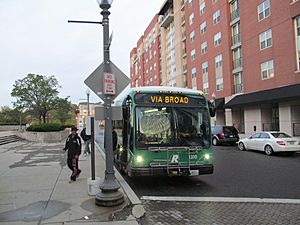 Kennedy Plaza, the main hub for RIPTA bus service, is located 0.25 miles (0.40 km) to the south along Exchange Street. Five RIPTA routes, including the R-Line rapid bus service, operate directly to Providence. Four routes stop on Gaspee Street on the north side of the station:

Two routes run on Park Row West on the south side of the station:

A taxi stand is located on Gaspee Street on the north side of the station.

All content from Kiddle encyclopedia articles (including the article images and facts) can be freely used under Attribution-ShareAlike license, unless stated otherwise. Cite this article:
Providence station Facts for Kids. Kiddle Encyclopedia.