Stoughton is an MBTA Commuter Rail station in downtown Stoughton, Massachusetts. It is the current terminus of the Stoughton Branch of the Providence/Stoughton Line. The station has a parking lot to serve local riders and those driving from further south, as Stoughton is close to the Massachusetts Route 24 expressway. Stoughton currently has one platform (split across Wyman Street) serving one track; the platform has a mini-high section for accessibility. 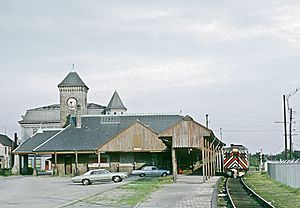 A Penn Central Budd RDC at Stoughton in 1971

Stoughton station is proposed to be reconstructed as part of Phase 2 of the South Coast Rail project, which would extend the Stoughton Branch south to several South Coast cities in 2030. A second track would be added through the station to support increased bidirectional service; the two new platforms would be located fully south of Wyman Street so that trains do not block the crossing.

Due to a sharp curve, full-length high-level platforms were originally thought not to be feasible; instead, each platform was to have a 45-foot-long mini-high platform at the southern end.

Under newer plans, the tracks would be moved slightly west south of Wyman Street, so that full-length high-level platforms will be built a block south at Brock Street, connected with an overhead pedestrian bridge. A new parking area with nearly twice the number of spaces would be built; the old right-of-way and parking areas would be redeveloped. The town of Stoughton opposes the plan because it would increase rail traffic though grade crossings in downtown Stoughton.

All content from Kiddle encyclopedia articles (including the article images and facts) can be freely used under Attribution-ShareAlike license, unless stated otherwise. Cite this article:
Stoughton station Facts for Kids. Kiddle Encyclopedia.