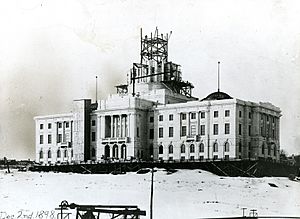 The building in 1898, under construction

This is Rhode Island's seventh state house and the second in Providence after the Old Rhode Island State House. The architectural firm of McKim, Mead, and White designed it, and it was constructed from 1895 to 1904. The building had a major renovation in the late 1990s. It served as the United States Capitol exterior in the 1997 film Amistad. It also served as the City Hall of Capital City in Disney's Underdog. 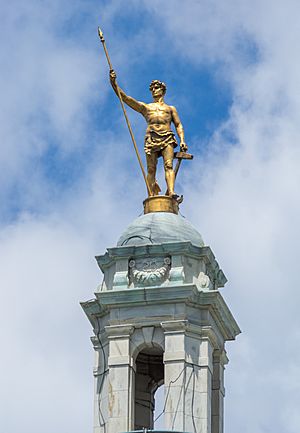 The Rhode Island State House is constructed of 327,000 cubic feet (9,300 m3) of white Georgia marble, 15 million bricks, and 1,309 short tons (1,188 t) of iron floor beams. The dome is "considered to have the fourth largest self-supported marble dome in the world". On top of the dome is a gold-covered bronze statue of the Independent Man, originally named "Hope". The statue weighs more than 500 pounds (230 kg); it is 11 feet (3.4 m) tall and stands 278 feet (85 m) above the ground. The Independent Man represents freedom and independence and alludes to the independent spirit which led Roger Williams to settle and establish Providence Plantations and later the Colony of Rhode Island and Providence Plantations.

The chamber of the Rhode Island Senate is located in the east wing of the building, and the chamber of the Rhode Island House of Representatives is located in the west wing. Other notable rooms include the rotunda (beneath the dome), the State Library (north end), and the State Room (south end). The State Room is an entrance area for the office of the governor and contains a full-scale portrait of George Washington by Rhode Island native Gilbert Stuart. This room is also where the governor has press conferences and bill signings at the State House. It was one of the first public buildings to use electricity. It is lit by 109 floodlights and two searchlights at night.

In 2013, Governor Lincoln Chafee's administration started to remove grass from the eastern side of the Statehouse lawn in order to provide extra parking for employees. The move was opposed by the Capital Center Commission, the public board designated to oversee zoning requirements within the district. Supporters of the proposed parking say that there is demand from employees and visitors to the building. Opponents point to existing zoning requirements that make the surface lot illegal, point to the expense of providing parking, and advocate an increased presence for transit, biking, walking, and carpooling instead. The state spent $3.1 million on an adjoining piece of land on Francis Street next to I-95 for parking, which provides 100 parking spots at around $30,000 a space.

Christmas at the State House 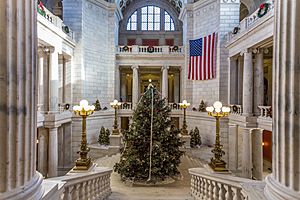 It is an annual State House tradition to feature a Christmas tree and community and cultural holiday displays each December. A Fraser fir or Balsam fir is erected in the rotunda and decorated. The tree, donated by a local family or tree farm, is typically between 17 and 25 feet tall.

Since 2014, holiday displays from "any Rhode Island area-based religious or secular group" have been featured on the first and second floors. Participating groups have included local religious, ethnic, and secular organizations.

All content from Kiddle encyclopedia articles (including the article images and facts) can be freely used under Attribution-ShareAlike license, unless stated otherwise. Cite this article:
Rhode Island State House Facts for Kids. Kiddle Encyclopedia.