Smith Hill is a neighborhood in Providence, Rhode Island. Its traditional bounds are the Woonasquatucket River, the Chad Brown public housing complex, Interstate 95 and West River.

The Roger Williams Medical Center (RWMC) is located in the Smith Hill neighborhood and is adjacent to the VA hospital. 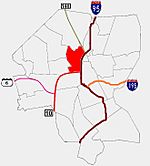 During the 19th and 20th centuries, Smith Hill became a densely populated area owing to its proximity to the Woonasquatucket and Moshassuck Rivers, which provided the power needed for the industrial mills.

The neighborhood is home to whites of European descent and an increasing number of minorities. As of the 1990 census, Smith Hill was 20% Hispanic, 17.2% Asian and 12.2% black. The neighborhood's unemployment and poverty rates are above average for the city, though efforts have been made to revitalize the area, although, without success.

All content from Kiddle encyclopedia articles (including the article images and facts) can be freely used under Attribution-ShareAlike license, unless stated otherwise. Cite this article:
Smith Hill, Providence, Rhode Island Facts for Kids. Kiddle Encyclopedia.