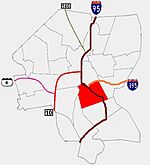 After the founding of Providence, the area that is today Upper South Providence Between 1754-1868, the neighborhood and areas south were part of the city of Cranston, Rhode Island. The area did not witness substantial development until the industrialization of the late 19th century, when it attracted Irish and Jewish immigrants.

Nearly half of all public school children under the age of six speak a language other than English as their primary language. This is slightly below the city-wide average of 54%.

The Upper South Side continues to struggle with entrenched poverty. The median family income was $24,656 as of March 2007, well below the city-wide average of $32,058. As of the year 2000 census, the area's unemployment rate at 17% was the highest in the city, with 27% unemployment in the Upper South Side's largest block. 36.4% of families live below the poverty line while 16% rely on some form of public assistance. One in four children in this neighborhood under the age of six have been exposed to high amounts of lead, primarily from lead paint in older homes.

Unlike other neighborhoods in Providence, Upper South Providence does not include many parks or green spaces. The largest green space in Upper South Providence is the Davey Lopes Recreation Center at the corner of Dudley Street and Prairie Avenue. Smaller parks include the Dudley Street Gateway and the Pearl Street Park. Peace & Plenty Park is located at 98 Peace Street, in nearby Elmwood. This 10,000 sq ft. playground is one of the few playgrounds in the South Side of Providence.

All content from Kiddle encyclopedia articles (including the article images and facts) can be freely used under Attribution-ShareAlike license, unless stated otherwise. Cite this article:
Upper South Providence, Providence, Rhode Island Facts for Kids. Kiddle Encyclopedia.