Elmwood is a neighborhood in the South Side of Providence, Rhode Island. The triangular region is demarcated by Broad Street, Elmwood Avenue, and Interstate 95. 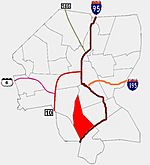 Providence neighborhoods with Elmwood in red

Prior to the 1850s, the region had been used primarily as farm land. Then, in the late 18th and early 19th centuries, as the city began to expand south and west with the development of manufacturing and shipping interests, the area began to develop. In the 1840s through 1860s, as the city of Providence expanded from a population of 23,000 to past 50,000, development crept southwestward along Broad Street. As areas began to be densely populated, the remaining farms were subdivided.

The neighborhood takes its name from one of its principal developers, Joseph J. Cooke, who in 1843 purchased a large tract of farm land and named the estate "Elmwood". He and other developers sought to build a model suburban community with wide streets and shade-giving elm trees.

As public transportation improved from omnibuses (horse-drawn carriages) to horse-drawn tracked cars, and finally to electrified streetcars, development began to quicken pace. A number of manufacturers moved to Elmwood, while the area near Public St, Elmwood Ave, and Potters Ave began to develop as a middle to upper class residential neighborhood.

As the automobile came to increase in popularity, businesses in the form of car dealerships, garages, and service stations would proliferate along Elmwood Avenue. As trolley service was bustituted, Elmwood Ave was widened significantly and the elm trees Cooke planted had to be removed. These changes in streetscape change the character of the neighborhood irrevocably.

When the 1950s came, Interstate 95 was constructed, and many single-family homes were converted into apartments. Combined with the aging housing stock and traffic congestion, the neighborhood became less appealing to the middle-class, who left in large numbers during this time. By the early and mid 1970s, spot demolition on dilapidated houses became common and Elmwood fell into disrepair.

In more recent years, there have been many efforts to restore many older mansions and revitalize the neighborhood. In 1980, two large, predominantly residential areas of Elmwood were added to the National Register of Historic Places as the Elmwood Historic District, with emphasis on their nineteenth century revival and Victorian houses. Additionally, the City of Providence has established local (municipal level) historic districts as North Elmwood and South Elmwood, which protect historic properties and the neighborhood's historic identity by restricting exterior modifications of architectural items such as windows, porches, slate roofs, etc. Restoration efforts in Elmwood were featured on 'Season 11 of Bob Vilia's Home Again' when he helps 11 neighbors with various projects over the course of 13 episodes highlighting the historic nature of homes in the neighborhood. 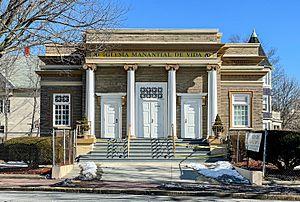 A Hispanic church on Elmwood Avenue

The neighborhood remains one of the most ethnically, culturally, and racially diverse in the city. As of March 2007[update], 56.7% of the population was Hispanic, 23.3% Black or African-American, 23.6% White (10.5% Non-Hispanic White), 9.3% Asian, and 1.8% Native American. 70% of children under the age of six spoke a language other than English as their primary language. Median family income rates were well below the citywide average. Nearly 28% of families lived below the poverty line while nearly 17% received some form of public assistance. Nearly one in four children had been exposed to high amounts of lead, mostly from lead paint in older homes.

Additional green space in Elmwood is provided by two historic cemeteries along Elmwood Avenue: Grace Church Cemetery at the northern tip of Elmwood, and Locust Grove Cemetery, which is adjacent to the South Elmwood Local Historic District. Immediately to the south of the neighborhood lies Roger Williams Park, the city's premier public park.

The urban forest in Elmwood is composed of trees in parks and cemeteries, trees on private property, and street trees which line the sidewalks of the neighborhood. As of 2006, Elmwood's Urban Tree Canopy was estimated at 16.3% of total land area. Elmwood's urban tree canopy was below the citywide average, which was 23% of total land area.

In northern Elmwood, Teatro ECAS is a Spanish-language performing arts space. At the northern tip of Elmwood Avenue, and at the nexus of the Elmwood, Upper South Providence, and the West End neighborhoods, the Southside Cultural Center of Rhode Island hosts a number of arts and cultural organizations and offers performance space.

All content from Kiddle encyclopedia articles (including the article images and facts) can be freely used under Attribution-ShareAlike license, unless stated otherwise. Cite this article:
Elmwood, Providence, Rhode Island Facts for Kids. Kiddle Encyclopedia.