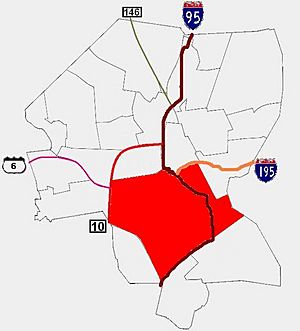 Providence neighborhoods with South Side in red 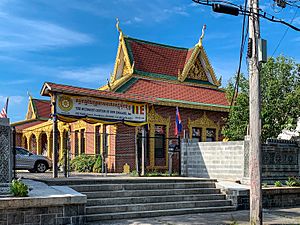 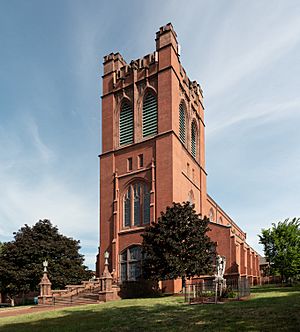 The South Side of Providence, Rhode Island, originally South Providence, is a term frequently used to describe the collective region comprising the official neighborhoods of Upper and Lower South Providence, Elmwood and the West End. The name was first used in the 1830s when the New York, Providence and Boston Railroad established its first station at a pier on the Providence River on a point of land about one half mile south of downtown Providence. The station was named South Providence.

Hispanics comprise the majority of the population, with over half its residents claiming Hispanic ancestry, as compared to thirty percent of Providence residents as a whole. Consequently, it has a high percentage (64%) of children enrolled in public school whose first language is not English, with the most commonly spoken language being Spanish.

The area continues to struggle with poverty issues; the South Side's median family income is $23,379 as compared with $32,058 for the city as a whole, and more than one out of three families lives in poverty.

As of August 2005, 52.3% of South Side residents were Hispanic, 24.4% were African-American, 12.2% were non-Hispanic white, 9.1% were Asian, and 2% were Native American. 64% of public school children under the age of six spoke a language other than English as their primary language.

The median family income was $23,379, which was 75% of the citywide average. 35.5% of families lived below the poverty-line. 30.3% of families received some form of public assistance.

Nearly one in four children had been exposed to unsafe quantities of lead. This is generally attributed to the prevalence of lead paint in older homes, though older plumbing may also be a factor.

All content from Kiddle encyclopedia articles (including the article images and facts) can be freely used under Attribution-ShareAlike license, unless stated otherwise. Cite this article:
South Side, Providence, Rhode Island Facts for Kids. Kiddle Encyclopedia.