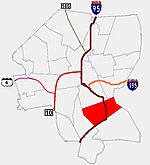 Originally the area that is now Lower South Providence was pasture land. The area was ceded to the new town of Cranston in 1754 and would not rejoin Providence until 1868.

A streetcar, added in 1865, ran west along Public Street, and then south down Ocean Street, and would transform the Lower South Side into Providence's first streetcar suburb. In the next ten years, the streets along which the streetcar ran developed quickly.

Between 1860 and 1880, as the population of Providence doubled to 104,857, Irish immigrants, which had hitherto been confined further north, began to populate the southern part of Lower South Providence. Because the city of Cranston was traditionally Republican, residents began to fear that a large immigrant population, which overwhelmingly voted Democratic, would undermine its Republican political affiliations. For this reason, Cranston ceded the Lower South Side (along with Washington Park) back to Providence in 1868.

While the Upper South Side attracted industry for its proximity to downtown, the Lower South Side had greater access to Narragansett Bay and freight lines via the Port of Providence. Metal and jewelry factories appeared. Since factory owners and workers both lived near work, these operations encourage class mixture, which is reflected in the area's architectural stock. By the 1870s, fewer and grander single-family houses appeared, and the majority of housing became rented duplexes, rented by working class tenants.

By 1900, the large amount of housing construction and creation of new electrified rail lines, gave the area fast transportation and ample affordable housing, and the Lower South Side thrived. Between 1900 and 1950, now second and third-generation immigrants moved into newer, more affluent areas, with the increased prosperity they'd attained, depriving the region of its middle class. In 1943, the Roger Williams Housing Project was created, and though it was successful for the first 15 years, cuts in funding ultimately resulted in the most of the project's buildings being demolished.

After 1950, the automobile sentenced the area to a long inexorable decline. The creation of Interstate 95 under the Eisenhower Interstate System required demolition of existing buildings and severed the region's historical connection to the waterfront. Green space was lost as lots and yards were converted into driveways and garages. Street renovation resulted in the loss of hitherto tree-lined streetscapes. Tenants owning cars began to look further out for newer, more prosperous neighborhoods.

As of 1990, over half (54.1%) of Lower South Providence's residents were African-American, one in three was Hispanics, and roughly one in five was white. Four percent was Asian, and another 3.3 percent were Native American. More than four in ten residents did not speak fluent English, and less than half of the population under the age of 25 had completed high school. Unemployment was 20 percent compared with the city-wide average of 9.2 percent. Roughly one in three jobs were in manufacturing and another one in three were in professional services, accounting for the largest share of jobs.

All content from Kiddle encyclopedia articles (including the article images and facts) can be freely used under Attribution-ShareAlike license, unless stated otherwise. Cite this article:
Lower South Providence, Providence, Rhode Island Facts for Kids. Kiddle Encyclopedia.