Erving is a town in Franklin County, Massachusetts, United States. The population was 1,665 at the 2020 census. It is part of the Springfield, Massachusetts metropolitan statistical area. 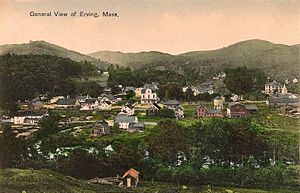 Located along the Mohawk Trail, the area was part of the Pocomtuc Indian Nation, whose villages nearby included Squawkeag in what is now Northfield, and Peskeompscut in what is now Turners Falls. Eventually, most of the native population was displaced and/or sold into slavery as a result of King Philip's War and a series of massacres of local Indian villages.

Subsequently, Erving was first settled in 1801 and officially incorporated—it being the last unincorporated land in Massachusetts—in 1838. What is now Erving was once the farm of John Erving, the first colonial in the area. Noted in the 19th century for timber and grazing, the town had seven sawmills, two chair factories, one pail factory, one children's carriage factory, and one bit-brace factory. Large numbers of railroad ties and telegraph poles were cut in the abundant forests here, as many as 1,495,000 in one year. Today, Erving has a school, a police and fire department, public library, several small stores and restaurants.

The terrain of Erving is hilly and rugged; most of the developed area of the town is located along the river. Northfield Mountain and its peaks occupy much of the northern two-thirds of the town. The mountain is the location of a pumped storage hydroelectric facility.

Erving is situated along Route 2, a heavily traveled state highway. 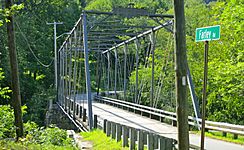 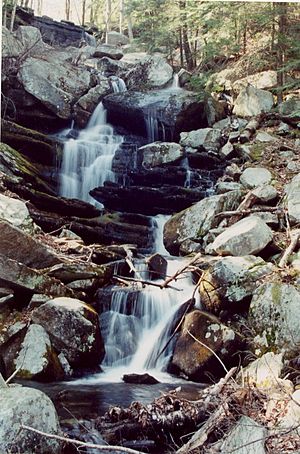 Briggs Brook Falls is located along the Metacomet-Monadnock Trail

There were 600 households, out of which 29.2% had children under the age of 18 living with them, 53.3% were married couples living together, 8.0% had a female householder with no husband present, and 33.3% were non-families. 26.7% of all households were made up of individuals, and 12.2% had someone living alone who was 65 years of age or older. The average household size was 2.45 and the average family size was 2.94.

All content from Kiddle encyclopedia articles (including the article images and facts) can be freely used under Attribution-ShareAlike license, unless stated otherwise. Cite this article:
Erving, Massachusetts Facts for Kids. Kiddle Encyclopedia.