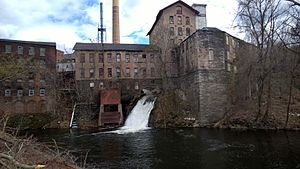 The Hockanum River flowing through a textile mill in Downtown Rockville, Connecticut.

The Hockanum River is a river in Connecticut. Hockanum is derived from the Native American Podunk people Algonquin language word meaning "hook-shaped", so named because of the course of the river. The Hockanum neighborhood in East Hartford is named after it.

It rises at the outlet of Shenipsit Lake in Rockville, then flows through Vernon, Ellington, Manchester, and East Hartford. Its mouth on the Connecticut River is immediately north of the Charter Oak Bridge and south of and across from the mouth of the Park River.

Historically used for industry, the river has in recent years had hiking trails and linear parks developed along its banks. The banks of the river are slowly being cleaned up after years of pollution and dumping.

All content from Kiddle encyclopedia articles (including the article images and facts) can be freely used under Attribution-ShareAlike license, unless stated otherwise. Cite this article:
Hockanum River Facts for Kids. Kiddle Encyclopedia.