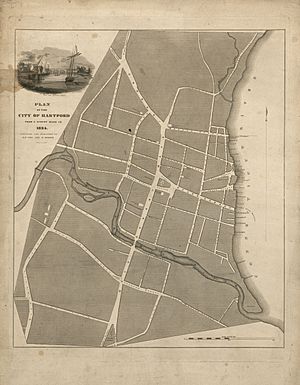 The Park River, sometimes called the Hog River, flows through and under the city of Hartford, Connecticut. Between 1940 and the 1980s, the 2.3-mile (3.7 km) river was buried by the Army Corps of Engineers to prevent the spring floods regularly caused by increased surface runoff from urban development. 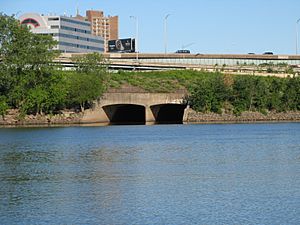 The confluence of the Park River and the Connecticut River

Before European settlement, the Suckiaug people (their name derived from the word sucki-auke, meaning "black earth") lived on the fertile banks of the Connecticut and Park rivers. In 1633, fur traders from the Dutch West India Company set up Fort Goede Hoop at the rivers' confluence. The Dutch referred to today's Connecticut River as the "Great River", and called its tributary, the Park, the "Little River".

The first English settlers arrived in the area in 1635; the following year, the Reverend Thomas Hooker led 100 of his congregation to form a new settlement north of the Dutch fort. The first mill in the settlement was built on the Little River by Matthew Allyn to grind local corn. During industrialization, the Little River became known as Mill River because of the numerous mills built to use its water power.

The lower part of the river was prone to flooding. Damaging floods in 1936 and 1938 led to a public works project to move the lower part underground, which was started by the US Army Corps of Engineers in 1940. The conduit under Bushnell Park (for which the river was named) was completed in 1943-1949. Sections farther upriver were completed after the next big floods in August 1955, which followed two hurricanes (Connie and Diane) that came about a week apart, and the whole project was completed in the 1980s, with a total of more than 9 miles of river underground. 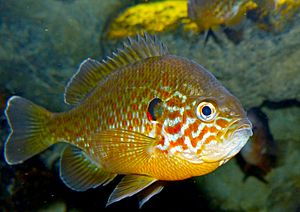 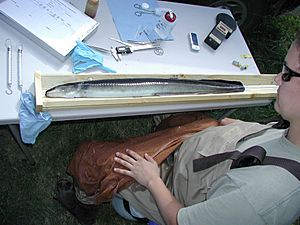 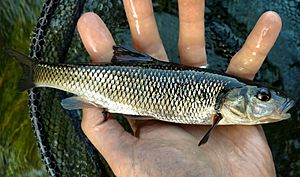 The North Branch Park River watershed is a 28.6 square-mile basin within the Park watershed. It has a watershed management plan that was completed in 2010, and its subwatersheds are mapped here. Four major tributaries — Beamans Brook, Wash Brook, Filley Brook, and Tumbledown Brook — drain from Bloomfield and northern parts of West Hartford, converging near the University of Hartford to form the North Branch of the Park River. Upstream drainage from the entire watershed flows between the West End, Blue Hills, and Asylum Hill neighborhoods of Hartford, Connecticut’s capital city, before pouring into an underground conduit north of Farmington Avenue. The North Branch is exposed once more on the northern edge of Pope Park, just before it joins the South Branch and flows from there to the Connecticut River in a conduit.

The watershed features a number of native and introduced fish, many of which are game fish. A 2000 survey found American Eel, Pumpkinseed, and Tessellated darter to be the most abundant species in the North Branch. A 2008 survey found that North Branch tributary creeks hold large populations of Eastern blacknose dace and Longnose dace. Largemouth Bass, Fallfish, Common shiner, Common carp, Bluegill, Redbreast sunfish, Rock Bass, White sucker, and Banded killifish are also found throughout the North Branch and its tributaries.

All content from Kiddle encyclopedia articles (including the article images and facts) can be freely used under Attribution-ShareAlike license, unless stated otherwise. Cite this article:
Park River (Connecticut) Facts for Kids. Kiddle Encyclopedia.