The banded killifish (Fundulus diaphanus) is a North American species of temperate freshwater killifish belonging to the genus Fundulus of the family Fundulidae. Its natural geographic range extends from Newfoundland to South Carolina, and west to Minnesota, including the Great Lakes drainages. This species is the only freshwater killifish found in the northeastern United States. While it is primarily a freshwater species, it can occasionally be found in brackish water.

The common name, "banded killifish", commonly refers to the distinct black and white vertical bandings found along their sides. The Latin genus name Fundulus is the diminutive of fundus, which means "bottom," and the specific name diaphanus means "transparent" in Greek. 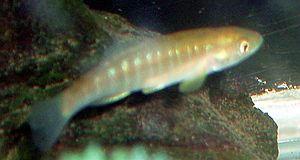 Closeup of a banded killifish to show anatomical features.

The banded killifish has an olive color on the dorsal surface and white coloring on the ventral. The throat and fins are yellowish. There are vertical blackish and silver-white stripes along the sides.

The average banded killifish ranges from 10 to 13 cm in length and weighs a few grams. The females tend to grow larger than the males. They also have darker bands on the sides. In contrast, the males have pale gray bands that are close together. The numbers of bands on the dorsal fin of a banded killifish is useful in determining the sex of this species.

The banded killifish is widely distributed throughout eastern North America, ranging from South Carolina to as far north as the Atlantic Provinces. They are also found in the eastern part of Montana to Minnesota and throughout the suitable habitats of the Great Lakes watershed of southern Ontario to Lake Superior. Due to biogeographical isolation and limitation of potential for range expansion, banded killifish species were assigned a status of special concern by the Committee on the Status of Endangered Wildlife in Canada (COSEWIC).

Adults range from 2 to 3 years in age. Banded killifish are schooling fish, usually traveling in groups of 3–6 individuals, while the juveniles travel in groups of 8–12. The fish are most often found in the shallow and quiet areas of clear lakes, ponds, rivers, and estuaries with sandy gravel or muddy bottoms and with abundant aquatic vegetation. The sand and gravel provides hatchlings and juveniles with places to hide when threatened by predatory fish such as the largemouth bass Micropterus salmoides, northern pike Esox lucius, bluegill Lepomis macrochirus, and trout. Because the banded killifish is small, it generally does not venture into deeper waters, where it would be vulnerable to predation as well as unable to swim in the fast currents. However, adult banded killifish have been observed to travel into deep bodies of water to feed. Banded killifish often congregate near aquatic vegetation, as it provides protection as well as breeding habitat.

Banded killifish are euryhaline, but they usually inhabit freshwater streams and lakes. The largest adult recorded, observed in Indian Bay, Canada, was 12.8 cm. People have used banded killifish as fish bait. Most people do not favor them as pets because they require a high level of maintenance and therefore do not survive well in an aquarium setting. They are important to aquatic ecosystems because they are a food source for larger fish such as largemouth bass, northern pike, and trout. They are also a food source for birds such as belted kingfisher (Megaceryle alcyon), common merganser (Mergus merganser), and herons.

In January 2005 the banded killifish was listed as a vulnerable species under the Newfoundland Labrador Endangered Species Act and the Canada Species at Risk Act (SARA). This species is facing habitat degradation due to industrial development, motorized watercraft activities, and removal of aquatic vegetations.

Banded killifish have been observed to feed at all levels of the water column. The adults feed on a variety of items such as insects, nymphs, mollusks, turbellarians, and other small crustaceans. Mosquito larvae are also a popular food source. In contrast, the smaller individuals are limited to fewer items such as chironomid larvae, cladocerans, copepods, and midge larvae. Both young and adult banded killifish have been observed to feed mostly in the afternoon.

Spawning occurs at water temperatures of 21˚ C to 23˚ C. The male chooses a site in the shallow part of the water and protects it from other males. When a female appears, the male will court the female and fight with the other prospecting males. The female will emit one egg while the male pursues her. Once together, the female emits 10 eggs that falls onto the bottom or gets attached to aquatic plants in the chosen spawn area. The male will continue to pursue the female until the female have laid 50 to 100 eggs.

A single female may lay several clutches of eggs during one summer. After the eggs have been fertilized, both the parents will leave and go their separate ways; the eggs do not receive parental care. 6-7 millimeter fries emerge within 10 to 12 days depending on the temperature of the water. They reach maturity at approximately 1 year with an average length of 6 cm. Banded killifish can live for a little over 2 years. However, there have been some that have been observed to live up to 3 years.

Banded killifish form group shoals. The conditions in which shoaling occurs, the individuals who comprise the shoal, and the size of the shoal are all highly variable. Shoaling can be understood through a cost and benefit analysis. The costs and benefits of group membership are influenced by food availability and predatory risk. Bigger groups allow for better predatory protection, but are not as conducive to foraging because the food will be distributed amongst all of the group members. For smaller groups, there is not as effective predatory protection, but in regards to foraging each individual will have access to more food.

The nutritional state of banded killifish influences individual's decisions to shoal or not. Food-deprived individuals spent more time by themselves and not in shoals. When food-deprived individuals were found in shoals their shoals were not any smaller than that of a well-fed banded killifish. Hungry banded killifish are more likely to leave a shoal than a well-fed individual. In the presence of a food stimulus, group size decreases, so that each individual does not have to compete with others for access to these resources. When presented with food odour, individuals were less attracted to neighbors, but when presented with a predatory stimulus, they were more attracted to neighbors and formed tighter shoals. When in the presence of both stimuli, the group size is intermediate.

In the presence of a predatory stimulus, banded killifish decrease the amount of food attempts and duration of feeding posture. This is done to allocate more energy to predatory vigilance and avoidance. In both the presence and absence of predatory stimuli, banded killifish feeding rate for individuals is independent of shoal size. Lone individuals incur additional cost because they do not gain the improved predatory protection granted by shoal formation, and thus will attempt to join larger shoals rather than smaller shoals. When deciding whether to join a shoal or not, banded killifish value predatory protection over foraging opportunities.

In the presence of a predatory stimulus, shoal size increases to allow for greater protection via the dilution effect. From the dilution effect, each individual will have a lesser chance of being attacked by a predator, since there are many other individuals in the group. In a larger group, there is a larger chance that a predator will attack a different shoalmate than it will attack the individual of interest. Individuals who stray from the shoal have an increased mortality risk. This leads to selection for grouping.

To improve predator avoidance, banded killifish will often take refuge. Frightened fish in the presence of a predatory stimulus will hide in a foodless refuge. This preference is modulated by individual body size. Larger individuals spend more time in the refuge than their smaller conspecifics. Smaller banded killifish individuals are more prone to risk than their larger counterparts.

All content from Kiddle encyclopedia articles (including the article images and facts) can be freely used under Attribution-ShareAlike license, unless stated otherwise. Cite this article:
Banded killifish Facts for Kids. Kiddle Encyclopedia.