South Hadley ( HAD-lee) is a town in Hampshire County, Massachusetts, United States. The population was 18,150 at the 2020 census. It is part of the Springfield, Massachusetts Metropolitan Statistical Area.

South Hadley was an uninhabited area of Hadley from 1659 until 1721 when the first English settlers arrived from Hadley. A separate town meeting was held in 1753, and the town was officially split and incorporated in 1775.

The town is the home of the nation's first successful navigable canal as well as the oldest continuing institution of higher education for women.

The Civil War Monument (believed to be by Jerome Connor) in the center of the Commons was given to South Hadley by William H. Gaylord in the 1900s. The Gaylords also donated the Gaylord Memorial Library, located near the center of town.

South Hadley is located in the western part of Massachusetts, specifically in the Pioneer Valley. It is bordered on the north by Hadley and Amherst, on the east by Granby, and on the south by Chicopee. The Connecticut River defines the town's western border and separates it from the cities of Holyoke and Easthampton. South Hadley is 45 miles (72 km) south of Brattleboro, Vermont, 87 miles (140 km) west of Boston, and 145 miles (233 km) from New York City.

Although no Interstate Highways cross South Hadley's borders, U.S. Route 202, and Massachusetts Highways 33, 47, and 116 provide primary routes of transportation. Interstate 91 can be accessed in Holyoke while Interstate 90 is accessible through Chicopee. Westover Metropolitan Airport is located in neighboring Chicopee; offering air services throughout the region. Bradley International Airport, serving the greater Hartford-Springfield area, is located 17 miles (27 km) to the south. The closest Amtrak station is in Holyoke.

The Village Commons, a center for dining, shopping, and leisure, is located at the juncture of Massachusetts Routes 116 and 47, in the area commonly called South Hadley Center. Additional commercial centers are located on Massachusetts Routes 116 and 33. South Hadley is also the home of Mount Holyoke College, the oldest continuously operating institution of higher education for women, founded in 1837.

According to the United States Census Bureau, the town has a total area of 18.4 square miles (48 km2), of which 17.7 square miles (46 km2) is land and 0.7 square miles (1.8 km2) (3.70%) is water. The mountain range called the Mount Holyoke Range passes through the north of the town and separates it from Hadley and Amherst. There are 12 reservoirs in the town fed by eight distinct streams and also six natural ponds.

The first confirmed evidence of a dinosaur to be found in North America was unearthed in South Hadley by Pliny Moody while plowing in 1802, 40 years before dinosaurs were identified as a fossil group. The sandstone slab bearing large, mysterious footprints was later purchased by Elihu Dwight, who gave the prints the name of "Noah's Raven". Professor Edward Hitchcock then obtained the slab, which is now on prominent display in the Amherst College Museum of Natural History. Hitchcock believed the fossils were made by gigantic ancient birds, long before scientists accepted that modern birds and dinosaurs are related.

Although South Hadley's economy has changed greatly in the last two centuries, reflecting the trends of the Commonwealth and country, today it still retains businesses in agriculture, education, and manufacturing. With Mount Holyoke College being by far the largest employer in the area, a number of other contractors, service providers, and businesses support the college. Additionally the area maintains a small agricultural sector with several farms, and is home to several small machine shops and manufacturing firms, including a research and manufacturing facility of the E Ink Corporation. 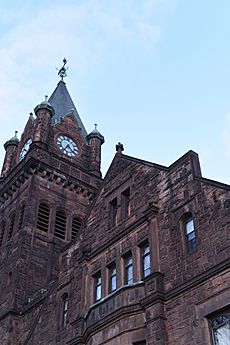 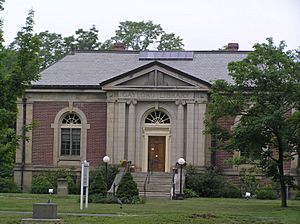 Mount Holyoke College, a member of the Five College Consortium, and one of the Seven Sisters colleges, is located in South Hadley.

The South Hadley High School Marching Band has competed in the state and/or New England USSBA Championship each year. In 2005 they placed second nationally and won Best Percussion. In 2006 they won the United States Marine Corps Esprit De corps award, second place in USSBA, and Best Percussion. In 2007 they took the best percussion for the third year in a row, Massachusetts USSBA championship, New England Championship, and seventh place in the Northern States championship. In 2008 they repeated as best percussion (for the fourth straight year) and seventh place in the Northern States championship. South Hadley continues to have one of the only competitive marching band programs in all of Western Massachusetts.

Berkshire Hills Music Academy (BHMA), founded in 1999 and opened in 2001, is a private post-secondary residential school for young adults with learning or developmental disabilities. The school is located on 40 acres (16 ha) at the former Joseph Skinner estate.

All content from Kiddle encyclopedia articles (including the article images and facts) can be freely used under Attribution-ShareAlike license, unless stated otherwise. Cite this article:
South Hadley, Massachusetts Facts for Kids. Kiddle Encyclopedia.