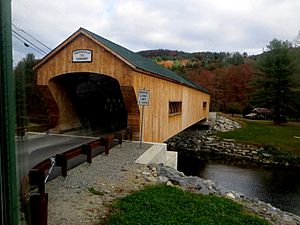 The new Bartonsville covered bridge, taken from the Green Mountain Flyer excursion train, on the south side of the Williams River.

The Bartonsville Covered Bridge is a wooden covered bridge in the village of Bartonsville, in Rockingham, Vermont, United States. The bridge is a lattice truss style with a 151-foot span, carrying Lower Bartonsville Road over the Williams River. It was built in 2012, replacing a similar bridge built in 1870 by Sanford Granger. The 1870 bridge, which was listed on the National Register of Historic Places, was destroyed in 2011 in flooding caused by Hurricane Irene.

The bridge was built after the great flood of 1869 that changed the course of the river, replacing another covered bridge about 1/4 mile up the road where the river used to flow. The bridge is listed on the National Register of Historic Places.

It was located on Lower Bartonsville Road, a paved road a short distance north from Vermont Route 103. Nearby, to the east, is the Worrall Covered Bridge, also built by Granger.

Destruction by Hurricane Irene and replacement

On August 28, 2011, the bridge was destroyed by flash flooding caused by excessive rainfall from Hurricane Irene's landfall on the U.S. East Coast. An effort to rebuild the structure was supported by town officials, who voted to use the bridge's insurance money to build another covered bridge.

All content from Kiddle encyclopedia articles (including the article images and facts) can be freely used under Attribution-ShareAlike license, unless stated otherwise. Cite this article:
Bartonsville Covered Bridge Facts for Kids. Kiddle Encyclopedia.