Jason John Bonham (born 15 July 1966) is an English drummer. Bonham is perhaps best known for being the son of the late Led Zeppelin drummer John Bonham and Patricia "Pat" Bonham (born Phillips). After his father's death in September 1980, he played with Led Zeppelin on different occasions, including the Ahmet Ertegun Tribute Concert at The O2 Arena in London in 2007. 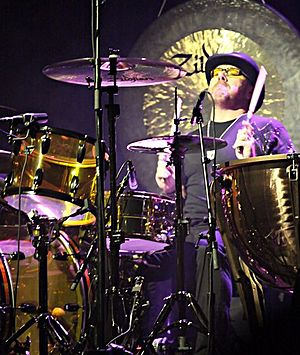 Bonham first began playing drums at the age of four, and appeared with his father in the film The Song Remains the Same, drumming on a scaled-down kit. At 17, he joined his first band, Airrace. In 1985, he joined Virginia Wolf, making two albums and touring the US supporting the Firm.

In 1988, Bonham joined former Led Zeppelin guitarist Jimmy Page for his Outrider album and tour. In May of the same year, Bonham appeared with the three surviving members of Led Zeppelin for a performance at Atlantic Records 40th Anniversary concert in New York City.

In 1995, Jason represented his father when Led Zeppelin was inducted into the Rock and Roll Hall of Fame, with his sister Zoe by his side. Bonham soon put together another solo project that culminated in In the Name of My Father - The Zepset, which featured the songs of Led Zeppelin. Proceeds from the album went to charity. 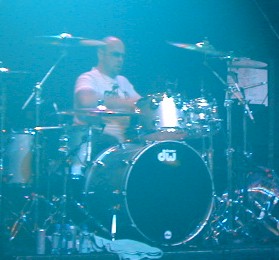 Bonham has produced his own line of signature series drumstick with Pro-Mark. The SD531W is made of American Maple with acorn shaped, wooden tips. The taper is relatively short and the sticks have considerably large dimensions, being 16.75" (42.5 cm) in length and 0.595" (1.5 cm) in diameter. The sticks also feature the symbol used by Bonham's father, John Bonham, of the three interlocking rings – they are printed next to Jason's signature on the side of the stick.

All content from Kiddle encyclopedia articles (including the article images and facts) can be freely used under Attribution-ShareAlike license, unless stated otherwise. Cite this article:
Jason Bonham Facts for Kids. Kiddle Encyclopedia.