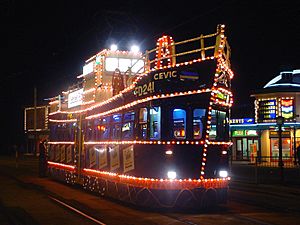 Blackpool Illuminations is an annual Lights Festival. It was founded in 1879 and first switched on 18 September that year. It is held each autumn in the English seaside resort of Blackpool on the Fylde Coast in Lancashire.

Also known locally as The Lights or The Illuminations, they run each year for sixty six days. It starts from late August until early November at a time when most other English seaside resorts' seasons are coming to an end. Dubbed as The greatest free light show on earth, they are 6 miles (10 km) long and use over one million bulbs.

All content from Kiddle encyclopedia articles (including the article images and facts) can be freely used under Attribution-ShareAlike license, unless stated otherwise. Cite this article:
Blackpool Illuminations Facts for Kids. Kiddle Encyclopedia.