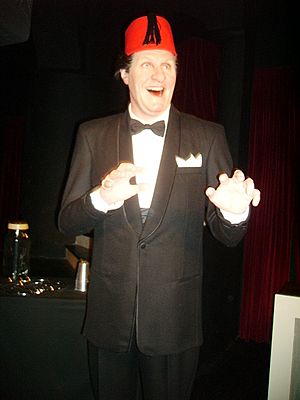 Waxwork of Tommy Cooper in Madame Tussauds in Blackpool, Lancashire.

Thomas Frederick "Tommy" Cooper (19 March 1921 – 15 April 1984) was a British prop comedian and magician. He was famous for wearing a red fez, his large build and failing magic tricks as part of his comedy. He was actually a skilled magician and was a member of The Magic Circle.

Cooper was born in Caerphilly, Glamorgan, Wales. He was married to Gwen Henty from 1947 until his death. They had two children, daughter Victoria and son Thomas (1956–1988), who became an actor.

Cooper died due to a heart attack on 15 April 1984 at Her Majesty's Theatre in London. He was 63. He was performing as part of his comedy routine on live television when he slumped to the ground because of the heart attack. He died shortly after.

All content from Kiddle encyclopedia articles (including the article images and facts) can be freely used under Attribution-ShareAlike license, unless stated otherwise. Cite this article:
Tommy Cooper Facts for Kids. Kiddle Encyclopedia.