The Magic Circle is a British organization dedicated to promoting and advancing the art of magic. 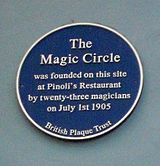 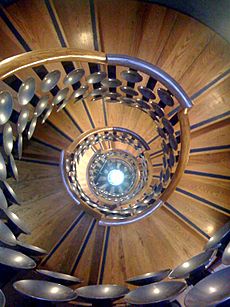 A staircase at The Magic Circle building

The Magic Circle was founded in 1905 after a meeting of 23 amateur and professional magicians at London's Pinoli's Restaurant. At this founders meeting, chaired by Servais Le Roy, those present decided upon the name of the Society: it was initially felt that the name of the Society should be the Martin Chapender Club, in memory of the performer and founding member who had recently died at the age of 25. However, it was finally agreed that the name "Magic Circle", which shares the same initials as those of Martin Chapender, would be more appropriate.

The first official meeting was at the Green Man public house in Soho, but meetings were later in a room at St George's Hall in Langham Place, where David Devant and John Nevil Maskelyne were regularly seen performing.

The club was male-only until 1991, when more than 75% of members voted to admit women. As of 2010 there were around eighty female members of The Magic Circle, including Paul Daniels' wife, Debbie McGee. In 2014, Megan Knowles-Bacon became the first female officer in The Magic Circle, as well as the youngest person to be elected as an officer; she was elected as secretary.

The motto of the society is the Latin indocilis privata loqui, which the club claims to mean "not apt to disclose secrets" (but actually makes little sense and means something like "Private things not teachable or to be spoken [of]"). Members give their word not to willfully disclose magic secrets other than to bona fide students of magic. Anyone breaking this or any other rule may be expelled. 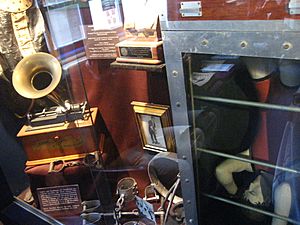 Since 1998, The Magic Circle building in central London near Euston Station in Camden has been available for meetings and corporate entertainment. It was voted the UK's Number One Venue in the hospitality industry's Top 20 UK Venues poll 2008.

The Magic Circle's headquarters houses a theatre, library, museum, a dining room, a clubroom and bars. The museum features magic tricks, props, posters, programs, toys, photographs and artefacts related to conjuring history. Items of interest include, Robert Harbin’s original Zig Zag illusion, Chung Ling Soo's robes, an original Sooty with associated Harry Corbett apparatus, sets of props used by television magicians David Nixon and Tommy Cooper, items and a sound recording of Harry Houdini taken from an Edison cylinder, and a set of cups and balls used by HRH Charles, Prince of Wales when he took his Magic Circle exam in 1975. Visits are by arranged tour.

Magicians who wish to join may spend up to two years as an Apprentice before applying for full membership. They need to have known two current members for at least one year and must be at least 18 years old. These two members are then asked to act as sponsors, or referees, on the candidate's application form and propose them as a suitable candidate for membership. Following the receipt and processing of the application, the candidate is invited to an interview with the examinations secretary, usually at the London headquarters. If the candidate proves suitable and sufficiently knowledgeable a performance exam is scheduled or a thesis may be written. The exam takes place in front of a panel of judges, and candidates must demonstrate their skills to members in a rehearsed act.

If a thesis is chosen, it is read by two examiners and a copy is made available in The Magic Circle library. The final stage is by vote by members of the Council, who will approve the candidate as a member. Once the applicant is successful, they are free to call themselves "Members of the Society" and use the letters M.M.C. after their name.

Within the society, there are a number of members never exceeding three-hundred known as the "Inner Magic Circle". Full membership of the Inner Magic Circle is denoted by the letters M.I.M.C. after the member's name. Membership of the Inner Magic Circle is by call of The Society's President. The M.I.M.C. degree may be awarded with a gold star, to signify that the recipient is a performer of magic (as opposed to e.g. an inventor, historian or noteworthy volunteer for the Society). The honour of a gold star does not necessarily signify the holder's excellence as a performer and not all recipients are performers of excellence.

Members must undertake not to reveal magic secrets to anyone except bona fide magicians, or endure the pain of expulsion.

The Young Magicians Club holds their annual one-day convention every October called 'J-Day'. The convention includes lectures and the finals of two competitions with awards, which include the Home Counties Trophy for stage magic, The Mark Leveridge Cup for close-up magic, Kaymar Komedy Cup and the Peter McCahon Award for Originality. In recent years, the celebrity guest lectures have been presented by Derren Brown in 2010, Dynamo in 2011, John Archer in 2012, Marvin Berglas in 2013, Luis De Matos in 2014 and Dave Loosley and Andi Gladwin in 2015.

The popularity of the Harry Potter franchise was one of the key reasons for the organisation's growth this century with membership doubling after the announcement of the first film in 2001.

All content from Kiddle encyclopedia articles (including the article images and facts) can be freely used under Attribution-ShareAlike license, unless stated otherwise. Cite this article:
The Magic Circle (organisation) Facts for Kids. Kiddle Encyclopedia.