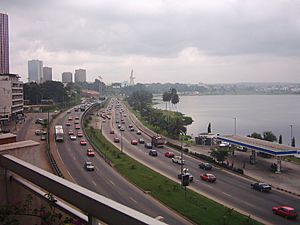 Abidjan is the largest city and former capital of Ivory Coast. It is the commercial and banking center of Ivory Coast as well as the de facto capital. Yamoussoukro is the official capital. The city is in Ébrié Lagoon. It is built on many peninsulas and islands which are connected by bridges. There are an estimated 4 to 5 million people living in the metropolitan area.

All content from Kiddle encyclopedia articles (including the article images and facts) can be freely used under Attribution-ShareAlike license, unless stated otherwise. Cite this article:
Abidjan Facts for Kids. Kiddle Encyclopedia.