King Fahd International Airport (Arabic: مطار الملك فهد الدولي‎code: ar is deprecated ) (IATA: DMM, ICAO: OEDF), also known by the acronym KFIA, is a Saudi international airport near Dammam. It is the largest airport in the world in terms of area.

The airport is an airline hub for the national carrier, Saudia.

Design started in 1976. The site master plan was created by architecture company Yamasaki & Associates and Boeing Aerosystems International. This plan was completed in 1977. Construction began in 1983. The airport opened for commercial operations in November 1999.

The airport's basic infrastructure was complete by the end of 1990. The General Authority of Civil Aviation of Saudi Arabia finally opened the new Dammam King Fahd International Airport on November 28, 1999 to commercial traffic. All airlines transferred their operations from Dhahran International Airport, which had been in use until then.

KFIA is northwest of Dammam. The airport serves the entire Eastern Region of Saudi Arabia and the growing urban complex made up of Dammam, Dhahran, Al Khobar, Qatif, Ras Tanura and Jubail with total population of about 2 million.

The airport, in the Eastern Province of the country, is located between Qatif and Dammam, about 25 km (16 mi) away from Dammam. It is linked to population areas by two major roads. The northern exit links the airport with Qatif as a 4-lane highway. The southern exit links the Airport with Dammam as a 6-lane highway to King Fahd Road which is now considered as the main road to the airport. Abu Hadriyah Highway, serves as the airport's eastern border while Dammam-Riyadh Highway serves as a southern border.

On the airport's southern border, Saudi Aramco occupies an area of 250 km² (97 mi²) which is used for oil drilling and transportation facilities. 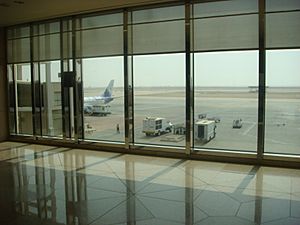 A Sama Airlines B737 parked at the airport, bound for Medina. View from the departure lounge of the terminal. 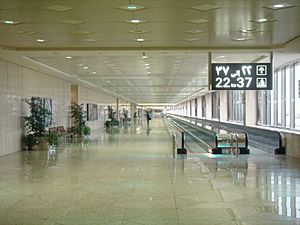 Inside the passenger terminal

The terminal has several customer counters of which 66 were allocated to Saudia (now shared with Nas Air), 44 to foreign airlines and the rest for Customs and Immigration.

The airport has several duty-free stores. In addition to the spaces allocated to duty-free stores, the airport has a separate area for shops specializing in the sale of gifts and all passenger related goods. This area includes restaurants, cafeterias, and banks, and is located on the arrivals level. Several ATMs and currency exchange shops are available in the departure and arrival areas. The airport is served by a multi-storey car park.

Smoking is not allowed in the airport. A fine of SR200 is collected breaking the rule. The airport has a smoking room in the Departure area.

The airport Mosque is built on the roof of the car park, in the middle of a landscaped area of 46,200 m² (497,292 ft²). The Mosque accommodates two thousand worshipers, access to it can be easily gained from the passenger terminal through two enclosed, air-conditioned bridges with moving belts, in addition to a third open bridge.

The Royal Terminal is reserved for the Saudi Royal Family, government , and official guests. The terminal was built on an area of 16,400 m² (176,528 ft²) and has four bridges connecting the terminal and aircraft. It is luxuriously furnished and decorated, and includes extensively landscaped exteriors and grounds. Despite its specialized purpose, the terminal is rarely used by the Royal Family, who generally prefer to utilize a similar special terminal at King Abdulaziz Air Base.

The airport has two parallel runways with a length of 4,000 m (13,123 ft) each, in addition to taxiways parallel to the runways and a cross taxiway to connect the two runways. A distance of 2,146 m (7,041 ft) separates the two runways to facilitate simultaneous takeoff and landing operations. For more convenience and shorter taxiing durations, the east runway is usually used by Saudi Aramco while commercial airlines use the west one, however situation changes if one of the runways is undergoing maintenance. Space has been set aside for the construction of a third parallel runway.

The airport is classified as Code E by ICAO which makes it designed to accommodate large aircraft lke Boeing 747-400 and A340-600. Although it may practically be possible for A380 to use the airport it is not recommended as in order to accommodate such aircraft as Airbus A380 or Boeing 747-8 it requires the airport to be Code F. Only the runways at Dammam Airport meet Code F requirements; the taxiways and gates do not. In May 2009, an Antonov 225 the world's largest aircraft landed at Dammam Airport from Ukraine whilst transporting equipment used for oil drilling and exploration to Tanzania for Schlumberger.

A road for ground support equipment (GSE) runs along the western side of the central terminal. It is designed to allow GSE to have access to aircraft and also to facilitate the movement of baggage vehicles from aircraft to baggage areas.

There are ten main Operations Services areas providing facilities for the operation of the airport.

The terminal’s design allows for transforming the operation system to a fully automatic system with multi-level racks and a container stacking system. When the air cargo facility becomes fully automatic, its capacity will be increased to 176,000 metric tons (194,007 tons) per year.

The control tower stands 85.5 meters (281 feet) high, equivalent to the height of a 30-story building. The height allows visibility of all parts of the airport operations area. Its total floor area is 7,960 m² (85,681 ft²), and it contains the following three main sections:

The total area of the car park is 176,752 m² (1,902,543 ft²), distributed among three covered floors. The parking area accommodates 4,930 cars. Cars enter the car park through a roadway that leads to the second floor. There is direct access to the passenger terminal from the parking on the first floor which lies under the access road with exits leading to the main roads. Parking charges are 1 Saudi Riyal per hour, which is a flat rate regardless how long you stay. There are no special long term parking rates.

Saudi Aramco is responsible for supplying fuel and maintaining fuel installations. These include six large tanks with a capacity of 40,000 barrels each, in addition to pumping equipment, filters, loading stations, and the distribution valve network. Saudi Aramco operates regular flights for its personnel, which originate from Dammam to cover Haradh, Tanajib, Shaybah, Hawtah, Al Ahsa, Khurais, Riyadh, Jeddah and Yanbu, using Boeing 737 and Dash-8 equipment.

The General Aviation terminal on the east side of Dammam airport is being used exclusively by Saudi Aramco. In addition, an advanced fleet of fuel tankers provides fuel services to all types of commercial aircraft.

King Fahd International Airport has its own plant nursery with a total area of 215,579 square metres (2,320,470 sq ft) which encompasses three green houses and 36,400 square metres (392,000 sq ft) of green fields. The nursery supplies the airport gardens and planted areas with trees and plants.

All content from Kiddle encyclopedia articles (including the article images and facts) can be freely used under Attribution-ShareAlike license, unless stated otherwise. Cite this article:
King Fahd International Airport Facts for Kids. Kiddle Encyclopedia.