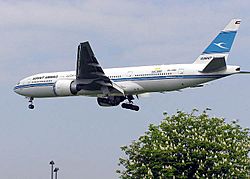 Kuwait Airways is Kuwait's national airline. It began in 1954. It has grown very fast. It is one of the largest airlines in the Middle East. It flies to 42 cities in different countries.

Kuwait Airways has 22 aircraft (with 4 more on order). The average age of their aircraft is 17.4 years.

All content from Kiddle encyclopedia articles (including the article images and facts) can be freely used under Attribution-ShareAlike license, unless stated otherwise. Cite this article:
Kuwait Airways Facts for Kids. Kiddle Encyclopedia.