King Abdulaziz International Airport (KAIA) is an airport located 19 km to the north of Jeddah. Named after King Abdulaziz Al Saud and inaugurated in 1981. The airport is the busiest airport of Saudi Arabia and the third-largest airport in the kingdom.

The airport occupies an area of 15 square kilometres (5.8 square miles). Beside the airport proper, this includes a royal terminal, facilities of Prince Abdullah Air Base for the Royal Saudi Air Force, and housing for airport staff. Construction work on KAIA airport began in 1974, and was finalized in 1980. Finally, on 31 May 1981, the airport opened for service after being officially inaugurated in April 1981. 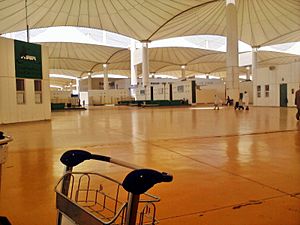 Because of Jeddah's proximity to Islam's holy city of Mecca, the airport has a dedicated Hajj Terminal, built to handle pilgrims taking part in the rituals associated with the annual Hajj. It can accommodate 80,000 travelers at the same time. It is known for its tent-like roof structure. The Hajj Terminal received the Aga Khan Award for Architecture in 1983, for how "the brilliant and imaginative design of the roofing system met the awesome challenge of covering this vast space with incomparable elegance and beauty."

Only customs, baggage handling and similar facilities are located in an air-conditioned building. The vast majority of the complex, called "Terminal Support Area", is a flexible, open area, conceived to function like a village, complete with souk (market) and mosque. 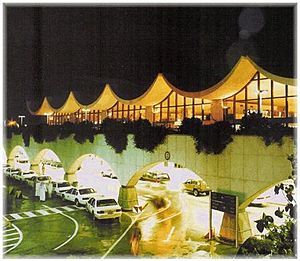 Not enclosed by walls, this area is sheltered from the intense sun while allowing for natural ventilation; because of this, some consider it to be a green, environmentally-friendly building.

The South terminal is used by Flyadeal, Garuda Indonesia, Kenya Airways, and Korean Air. The North Terminal at Jeddah airport is used by all other foreign airlines. 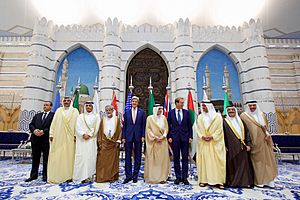 The new King Abdulaziz International Airport three-stage development started in 2006, and is currently scheduled for an official opening in mid 2019. The project is designed to increase the airport's yearly capacity from 13 million to 80 million passengers. 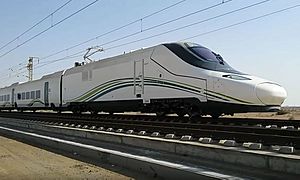 There will also be a newly constructed support services building and upgrades to the existing runway and airfield systems. The three stages, according to GACA—the General Authority of Civil Aviation of Saudi Arabia, will be marked by staged capacity increase to 30 million, 60 million and 80 million passengers per year. The new airport will be accessed by the Haramain high-speed rail project network.

All content from Kiddle encyclopedia articles (including the article images and facts) can be freely used under Attribution-ShareAlike license, unless stated otherwise. Cite this article:
King Abdulaziz International Airport Facts for Kids. Kiddle Encyclopedia.