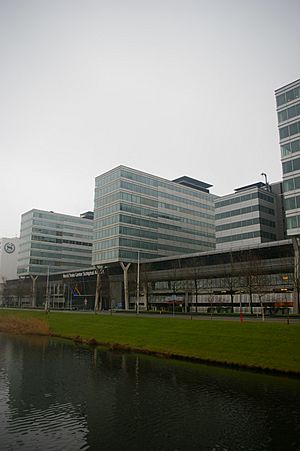 Schiphol World Trade Center, where SkyTeam has its head office

SkyTeam is the world's second largest airline alliance. Its headquarters are on the grounds of Amsterdam Airport Schiphol near Amsterdam, Netherlands. SkyTeam was founded or established in 2000 by five airlines, Aeroméxico, Air France, Delta Air Lines, and Korean Air. It was the last of the three major airline alliances to be established after Star Alliance and Oneworld. Though it was the last of three airline alliances to be established it is second only behind Star Alliance by number of passengers and number of member airlines. As of December 2013, SkyTeam is made up of 19 airlines from five continents, and operates with the slogan "Caring more about you".

SkyTeam flies to more than 1,000 destinations in 178 countries, and operates some 15,200 daily flights with a combined fleet of over 4,300 aircraft, including associate carriers. As of June 2013[update], the alliance and its members had a total workforce of 452,590; furthermore, it had 530 lounges worldwide to serve 569 million annual passengers.

All content from Kiddle encyclopedia articles (including the article images and facts) can be freely used under Attribution-ShareAlike license, unless stated otherwise. Cite this article:
SkyTeam Facts for Kids. Kiddle Encyclopedia.