Kids Encyclopedia Facts
This page is about the suburb of Dublin. For other uses, see Dundrum.

Dundrum (Irish: Dún Droma, the ridge fort), originally a town in its own right, is also a suburb of Dublin in Dún Laoghaire–Rathdown, Ireland. 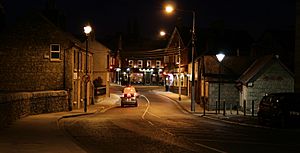 The area is located in the postal districts of Dublin 14 and Dublin 16. 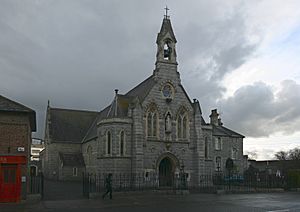 One of the earliest mentions of the area concerns the location of the original St. Nahi's Church in the 8th century on which site today's 18th-century church currently stands. The ancient name for Dundrum is "Taney" which derives from Tigh Naithi meaning the house or place of Nath Í.

Recent archeological excavations near the church have revealed three enclosures associated with the church, the earliest dating from the 6th century, and a significant find was an almost complete Flemish Redware jug from the 13th century.

The first reference to the placename of Taney occurs in the Charter of St. Laurence O'Toole to Christchurch in 1178 as "half of Rathnahi" and in the following year in a Papal bull of Pope Alexander III to the same archbishop as "Medietatem de Tignai". Variations of the spelling continued until the mid-16th century.

When the Normans arrived in 1169, a series of fortifications were built around Dublin. A castle was built in Dundrum as part of this series of outer fortifications around the 13th century. Later in 1590, a newer castle was built by Richard Fitzwilliam as part of a strategic line of castles within the Pale. The original village clustered around Dundrum Castle and was considered a rural defensive outpost against assaults and raids from Irish tribes and families such as the O'Tooles and the O'Byrnes. In 1619, a relation, William FitzWilliam, 3rd Viscount FitzWilliam was granted the castle in recognition of his bravery and courage while defending against these assaults but was driven out in 1642. He returned by 1646 but left again, never to return, in 1653. His family held onto the Fitzwilliam seat until 1790. The castle was never reoccupied and exists today as ruins overlooking the Dundrum Bypass and the new shopping centre. Recent excavations in 1989 recovered green glazed pottery known as "Leinster Ware", shells from oysters and cockles, animal bones, and shards of pottery from Saintongue in France probably used for storing wine.

The arrival of Richard Fitzwilliam and the building of the castle established commercial activity in the region. The village was well known for "The Manor Mill" where corn was ground into flour. An overflow waterfall was also used by a paper mill and an iron works.

In 1813, the original Roman Catholic church on Main Street was built. It was replaced by a larger building in 1878 and marked when Dundrum was constituted a separate parish from area previously covered by Booterstown. A large extension was built in 1956. The church is built in a Gothic style from Dublin granite with Portland and Bath stone used for the surrounds of windows and doors.

In 1818, Christ Church on Taney Road was opened as a replacement for a smaller church that stood on the same site. Selling pew sites raised funding for the new building, and the sale of 18 pews on the ground and 8 on the gallery raised nearly £400. The architect for the new church was William Farrell. Walter Bourne was born in 1795 in Dublin. He died on 19 Nov 1881 in Taney House. He married Louisa Arabella Minchin in 1821. 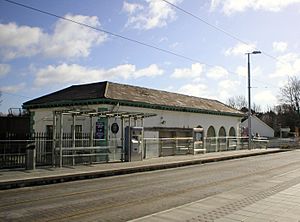 The original Dundrum station built by William Dargan in 1854 behind the modern Luas stop.

The village expanded greatly after the arrival of the Dublin and South Eastern Railway (DSER) in 1854. By 1876, the Manor Mill became a Laundry and was the largest employer of female labour in the region, The Laundry hooter was a regular and well-loved sound in its day, and would sound at 7.50am for thirty seconds, then at 8am to start work, and also at 13.50, 14.00, and finally at 16.50 and 17.00.

In 1881, a local builder, John Richardson, erected 26 cottages known as the Pembroke Cottages. The Manor Mill Laundry bought six of these cottages for its workers.

In 1893, a Dublin solicitor named Trevor Overend purchased an 18th-century farmhouse. Today, this building is named Airfield House and is open to the public.

The Dun Emer Press was founded at Dundrum by Elizabeth Yeats, assisted by her brother William Butler Yeats, in 1903.

In 1914, a Carnegie Library was opened by the then Lord Chancellor. Originally, the library was used as an entertainment facility for the community and the upper floor was equipped with a stage and even a kitchen. The building was also used as a school until the 1950s. 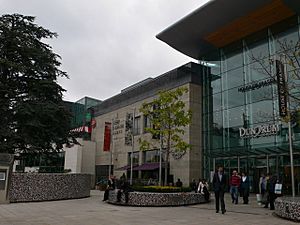 Dundrum Shopping Centre Opened in 2005 when Ireland was booming, this is the largest shopping centre in Ireland.

In 1971, Dundrum was one of the earliest places in Ireland to open a purpose-built shopping centre (the first being in Stillorgan). A much bigger shopping centre opened just south of Dundrum on 3 March 2005. Known as Dundrum Town Centre it contains within the complex one of the largest cinemas in Ireland, opened in early October 2005. The plans for the old shopping centre includes space for hotels, apartments and more retail outlets. However this has been postponed and the older retail units have been leased to new tenants such as Lidl, Classic Furniture, Mulvey's of Dundrum. Recently the old Dundrum Shopping Centre has been rebranded Dundrum Village Centre.

The College of Further Education in Dundrum is the local community Education and Training Board college. 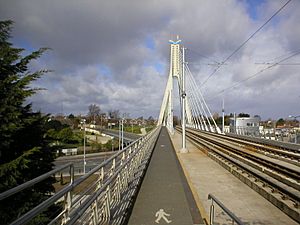 The Luas tram system passes through Dundrum, over the large cable-stayed William Dargan Bridge, at Taney Cross. It is the biggest engineering structure on the line.

The route was originally a railway line opened by the DSER. Closed in 1958, the alignment was preserved intact for several decades. Dundrum railway station opened on 10 July 1854, but was finally closed on 1 January 1959.

The 19th-century Irish physicist George Johnstone Stoney, the first person to posit the existence of the electron, resided in Dundrum for much of his adult life. Dundrum was also the home of Séamus Brennan, former Minister of Social and Family Affairs, and is the family home of cyclist Stephen Roche. Dundrum was also the childhood home for Radio One DJ Annie Mac. RTÉ host Derek Mooney lives in Holy Well. Oscar winner Brenda Fricker grew up here. Many of Eavan Boland's poems depict the urban landscape of the area.

All content from Kiddle encyclopedia articles (including the article images and facts) can be freely used under Attribution-ShareAlike license, unless stated otherwise. Cite this article:
Dundrum, Dublin Facts for Kids. Kiddle Encyclopedia.