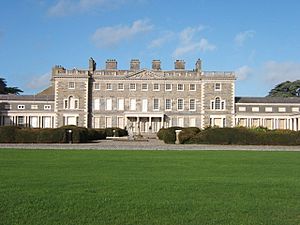 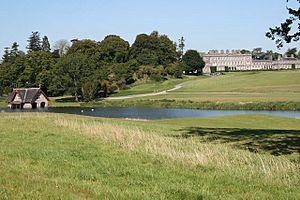 Carton House in 2009, with boathouse 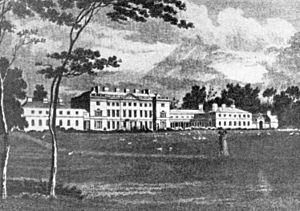 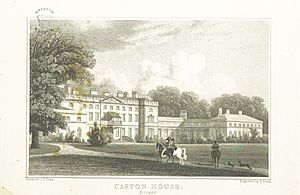 Carton House is a country house and surrounding demesne that was the ancestral seat of the Earls of Kildare and Dukes of Leinster. Located 23 km west of Dublin, in Maynooth, County Kildare, the Carton Demesne is 1,100 acres (4.5 km²). For two hundred years, the Carton Demesne was the finest example in Ireland of a Georgian-created parkland landscape. In the 2000s, much of the demesne was redeveloped into two golf courses and the house into a hotel complex. 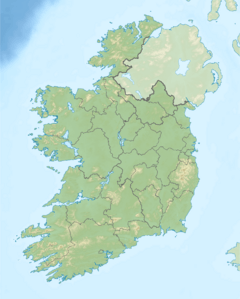 Beginning of the Carton Demesne

During a history spanning more than eight centuries, Carton Demesne has seen many changes. The estate first came into the ownership of the FitzGerald family shortly after Maurice FitzGerald, Lord of Lanstephan (c. 1105-1176), a Cambro-Norman noble, played an active role in the capture of Dublin by the Normans in 1170 and was rewarded by being appointed Lord of Maynooth, an area covering townlands which include Carton.

However, the 8th Earl's grandson, The 10th Earl of Kildare (1513-1537), better known to history as 'Silken Thomas', was executed at Tyburn in February 1537, with his five uncles, for leading an uprising against the English Crown. 'Silken Thomas', previously styled as Lord Offaly, had succeeded to the earldom in December 1534. Although the FitzGeralds subsequently regained their land and titles, they did not fully regain their position at either the Irish or British Courts until the 18th century, when The 19th Earl of Kildare (1675-1743) became a noted statesman.

The first record of a house at Carton was in the early seventeenth-century when William Talbot, Recorder of Dublin, was given a lease of the lands by the 14th Earl of Kildare (d. February 1612) and is thought to have built a house. The house and lands were forfeited to the Crown in 1691 and in 1703 sold to Major-General Richard Ingoldsby, Master General of the Ordnance.

Commencement of the current house

In 1739, as the Ingoldsby family had lost most of their money, the lease was sold back to the 19th Earl of Kildare, who employed Richard Cassels (1690-1751) to design the existing house. This was the same year the FitzGerald family bought Frescati House. Castle (originally Cassels) was also responsible for some other grand Irish houses, including: Castle Hume, on the shores of Lower Lough Erne in County Fermanagh; Summerhill House in County Meath; Westport House in County Mayo; Powerscourt House in County Wicklow; and, in 1745, Kildare House (later renamed Leinster House) in Dublin, which he also built for the FitzGeralds.

In 1747, the 20th Earl of Kildare (created His Grace the 1st Duke of Leinster in 1766) married Lady Emily Lennox, daughter of the 2nd Duke of Richmond and great–granddaughter of King Charles II. Lady Emily played an important role in the development of the house and estate as it is today. She created the Chinese Room (bedroom to Queen Victoria) and decorated the famous Shell Cottage on the property with shells from around the world. One of their 23 children was the famous Irish patriot Lord Edward FitzGerald, a leader of the 1798 rebellion.

Carton remained unaltered until 1815, when His Grace The 3rd Duke of Leinster (1791-1874) decided to sell Leinster House to the Dublin Society (renamed the Royal Dublin Society in 1820) and make Carton his principal residence. He employed Richard Morrison to enlarge and re-model the house. Morrison replaced the curved colonnades with straight connecting links to obtain additional rooms, including the famous Dining Room. At this time, the entrance to the house was moved to the north side.

Carton remained in the control of the FitzGeralds until the early twentieth-century when the 7th Duke of Leinster (1892-1976) sold his life interest to a moneylender, Sir Harry Mallaby-Deeley, to pay off gambling debts of £67,500. The 7th Duke, who was known as Lord Edward FitzGerald up until he inherited the dukedom in February 1922, was originally third in line to succeed, so he did not think he would ever inherit. However, both of his older brothers were unmarried and predeceased him.

His eldest brother was the 6th Duke of Leinster (1887-1922), who had succeeded as a child to the dukedom and estates in December 1893 but who suffered from serious psychiatric issues; the 6th Duke lived from 1907 until his death in February 1922 in a house in the grounds of Craig House Psychiatric Hospital in Edinburgh]m. Lord Edward's other older brother was Major Lord Desmond FitzGerald (1888-1916), an officer in the Irish Guards who was accidentally killed during a grenade demonstration at Calais during the First World War. So, Lord Edward inherited the dukedom and what remained of the Carton Estate in February 1922, thus becoming the 7th Duke. In this way, much of the Carton Estate was lost to the FitzGerald dynasty. Carton House and what remained of the Carton Estate was finally sold by the 7th Duke of Leinster and his son, the then Marquess of Kildare (1914-2004), in the late 1940s.

It is alleged that, in 1923, a local unit of the IRA went to Carton with the intention of burning it down. However, they were stopped when a member of the FitzGerald family brought a large painting of Lord Edward FitzGerald to the door and pointed out that they would be burning the house of a revered Irish patriot.

During the Second World War, Carton House was occupied by the Irish Army who used the building as the headquarters of the 2nd Infantry Division.

In 1949 the house was purchased by the 2nd Baron Brocket (1904–1967), a multi-millionaire Tory peer and businessman and a member, by descent, of the ancient Ulster family of Ó Catháin (O'Cahan or O'Kane), whose principal residence was Brocket Hall in Hertfordshire, England. Lord Brocket bequeathed Carton to his younger son, The Hon. David Nall-Cain, who having moved to the Isle of Man, sold the house in 1977 to the Mallaghan family.

In 2017 the Mallaghan family sold Carton House to John Mullen for €57 Million.

Government decision not to buy the estate

From 1977 to 2017, Carton House and Demesne was the property of the Mallaghan family, and in the 1980s and 1990s the Irish Government came under public and political pressure to buy the house and its grounds but decided not to do so.

The house was used as a film location by many film-makers and broadcasters. Two of the films made there were Stanley Kubrick's Barry Lyndon in 1975 and The Big Red One in 1980. They starred Ryan O'Neal (as an 18th-century Irish adventurer, with a soundtrack by The Chieftains) and Lee Marvin respectively. The film Leap Year, starring Amy Adams, Matthew Goode, and Adam Scott, shot some scenes at Carton during 2009.

Director Blake Edwards and wife actress, Julie Andrews, lived in Carton House over the summer and autumn of 1969 while filming the movie Darling Lili (1970). Rock Hudson, Andrews costar also lived on the grounds during filming. The actual house was used in the movie in several interior and exterior scenes.

More recently, Carton House was used as a prime location for the filming of the Irish drama Love/Hate.

Conversion into a hotel with golf courses

In 2000, Carton was redeveloped as a "premier golf resort and hotel", an action condemned by heritage groups, including An Taisce, and criticised in Seanad Éireann (the Irish Senate) by Senator David Norris. A hotel was added to the main house, altering it drastically, while the estate's eighteenth-century grounds were converted into two golf courses. 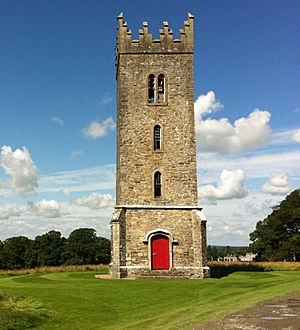 Allegedly originally built by Richard Talbot, 1st Earl of Tyrconnell, and intended for his mausoleum. Its official name is The Prospect Tower.

The famous Shell Cottage is a quaint cottage which once had a thatched roof and is decorated outside and inside with seashells. It was built for Her Grace Emily, Duchess of Leinster (1731-1814), wife of His Grace The 1st Duke of Leinster. 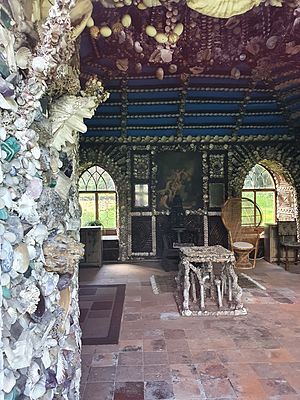 Interior of the Shell Cottage at Carton House 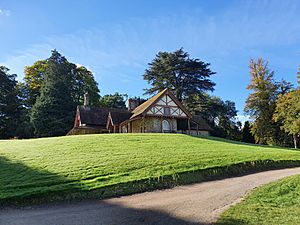 Exterior view of the Shell Cottage

Carton House Golf Club has two courses, one designed by Mark O'Meara and opened in 2002, the other designed by Colin Montgomerie and opened in 2003. The former is a parkland course, utilising the rolling land of the estate as well as the waters of the River Rye, while the latter features head high pot bunkers, "fast-running" greens and narrow fairways.

Carton House was the venue for the European Tour's Nissan Irish Open in 2005 and 2006, having previously hosted the 2004 and 2005 AIB Amateur Open Championship. In 2006, Carton House was the first Irish golf club to be awarded the 'Committed to Green' environmental award by the International Committed to Green Foundation, and the International Association of Golf Tour Operators, European Golf Resort of the Year 2008. The 2013 Irish Open was held on the Montgomerie Course at Carton House (27–30 June). The winner was England's Paul Casey with an outstanding −5 (67) on the final day including an eagle on the last for a total of −14 to win by 3.

The Golfing Union of Ireland, the longest established golf union in the world, have their national headquarters on the Carton House Demesne. This facility also comprises the GUI National Academy, a 22-acre (89,000 m2) teaching facility for up and coming golfers, as well as being a facility available to all golfers in Ireland.

A range of soccer teams come to Carton House for pre-season training. Newcastle United F.C. became the first team to train at the Platinum One group facility. Real Madrid became the second team to go to Carton House in 2009. Shamrock Rovers F.C. also trained there ahead of the 2010 season. Chelsea F.C. and Birmingham City F.C. have trained at the facility. It was visited by the Brazil national team during 2008. In July 2010, Wolverhampton Wanderers held a week-long training camp. During an interview for Irish TV, Wolves manager Mick McCarthy stated that Middlesbrough FC would be there later. In July 2013 Birmingham City F.C. held a week long training camp. In 2016 Newcastle United F.C. spent a week at Carton House during pre season, and returned for another week long stay in pre season 2017 and 2018. Burnley FC also visited during pre season 2017.

Dublin GAA used Carton House Demesne for training during the summer of 2009.

All content from Kiddle encyclopedia articles (including the article images and facts) can be freely used under Attribution-ShareAlike license, unless stated otherwise. Cite this article:
Carton House Facts for Kids. Kiddle Encyclopedia.