Castledermot Round Tower facts for kids

Castledermot Round Tower is a 10th-century round tower in Castledermot, County Kildare, Ireland. The tower, and the high crosses nearby, are a National Monument.

The tower is complete, although the original cap has been replaced with battlements. It is composed of rounded granite boulders embedded in mortar.

Castledermot was founded as a monastic settlement c. 800 AD. The bishop-poet Cormac mac Cuilennáin was buried here in AD 938 and the round tower was probably built around that time. The community ceased to exist some time after 1073. 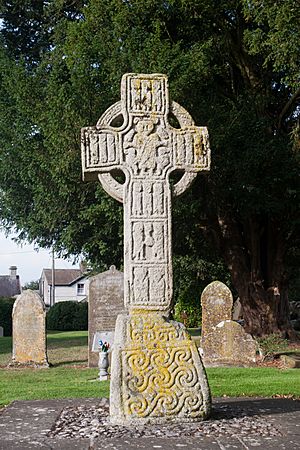 East face of the north cross

There are two high crosses:

All content from Kiddle encyclopedia articles (including the article images and facts) can be freely used under Attribution-ShareAlike license, unless stated otherwise. Cite this article:
Castledermot Round Tower Facts for Kids. Kiddle Encyclopedia.