Greystones (Irish: Na Clocha Liatha) is a coastal town and seaside resort in County Wicklow, Ireland. It lies on Ireland's east coast, 8 km (5.0 mi) south of Bray and 27 km (17 mi) south of Dublin, with a population of 17,468 (2011) The town is bordered by the Irish Sea to the east, Bray Head to the north and the Wicklow Mountains to the west.

The town was named after a half mile or one-kilometre stretch of grey stones between two beaches on the sea front. The harbour area and the Greystones railway station are at the northern and southern ends respectively. The North Beach, which begins at the harbour, is a stony beach, and some of its length is overlooked by the southern cliffs of Bray Head, which are subject to erosion. The South Beach is a broad sandy beach about one kilometre long. It is a Blue Flag beach and receives many visitors and tourists, mainly in the summer.

In 2008, Greystones was named as the world's 'most liveable community' at the LivCom Awards in China.

Greystones is located south of the site of an ancient castle of the Barony of Rathdown. There was a hamlet which, like the castle, was known as Rathdown, and which appeared on a 1712 map. This site occupied an area now known as the Grove, north of Greystones harbour, but only the ruins of a chapel, St. Crispin's Cell, survive. Greystones is a much more recent settlement and is first mentioned in Topographia Hibernica, a 1795 publication. Here it is described as a "noted fishing place four miles beyond Bray." 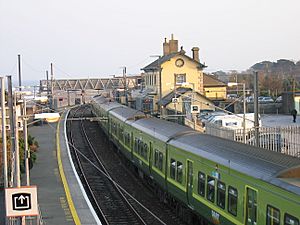 In the early 19th century, there were some families scattered around the harbour, Blacklion, Windgates, Killincarrig and Rathdown. Delgany was a more substantial and longer established village. However, Greystones was put on the map with the coming of the railway in 1855, a difficult undertaking which was performed in consultation with Isambard Kingdom Brunel, the famous engineer. The railway station was built on the line dividing the properties of two landowners: the La Touche family of Bellevue House (now in ruins, near Delgany), and the Hawkins-Whitshed family of Killincarrig House (which is now Greystones Golf Club). It provided links with Bray and Dublin, and left room for development on the adjoining estates.

In the latter half of the 19th century, under the ownership of William Robert La Touche, Greystones' development gathered momentum. To the north of the station, Church Road, Victoria Road and Trafalgar Road were laid out, and many houses were built in the years following the arrival of the railway. Following her father's death, Elizabeth Hawkins-Whitshed was the sole inheritor of his property. In 1879, she married Frederick Gustavus Burnaby; a soldier, politician and traveller. Burnaby died in battle in 1885 and Elizabeth remarried twice, but the property continued to be known as the Burnaby Estate. In the early 20th century, the Burnabys began to expand the town on their side of the station, and the roads and houses of the Burnaby were developed and the population grew considerably. The names of these two families remain well known today, with many roads and housing estates bearing their names.

Between 1885 and 1897, the people of Greystones campaigned for a harbour to aid the fishing industry and imports such as coal. The pier, dock, sea wall and boat-slip remain but have endured substantial damage. In the early 20th century, the town felt the effects of coastal erosion (which is still a major problem); the loss of fields and most of the houses on the North Beach Road, and the costly inland relocation of the railway have all resulted. In 1968, the old Kish lighthouse foundation was added to the end of the pier.

At the end of World War II, cars and petrol became widely available, allowing Greystones to gradually expand, filling in the space between itself and outlying areas such as Blacklion, Killincarrig and Delgany. However, the popularity of the railway declined; its very existence being in jeopardy during the 1980s, as government cutbacks reduced the service to just a few trains per day. The 1990s brought a revival with the arrival of the electrified DART from Bray, and a much more frequent schedule. 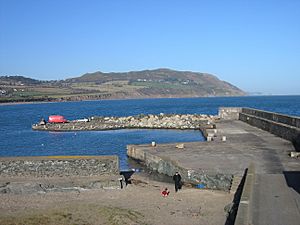 Greystones has experienced a huge increase in its population since the 1970s with the construction of several large housing estates. A new development at Charlesland, just south of the town, includes over 1,000 dwelling units. As of the 2006 census the population of Greystones, including town and environs, stands at 14,569 making it the second largest town in the county after Bray.

Along with the housing developments, road networks and facilities have been improved to cater for the growth. The road between Greystones and Bray has been widened and realigned. A new dual carriageway link road (R774) connecting Greystones to the N11 has been completed. Construction of a full interchange with the N11 has also been completed.

According to the 2006 census, Greystones has the largest Church of Ireland presence as a proportion of the population (9.77%).

Greystones is accessible from the N11 Dublin-Wexford road; a new interchange (Junction 11 on the N11) constructed near Charlesland connects with the town via a dual carriageway.

Greystones railway station, which opened on 30 October 1855, is the southern terminus of the DART railway line, a service which connects thirty stations along Dublin's east coast. Iarnród Éireann diesel Commuter and InterCity trains also serve Greystones, linking the town with Wicklow, Arklow, Gorey, Wexford, and Rosslare Europort to the south, and Dublin's Connolly Station to the north.

Greystones is served by the 84, 184 and 84X Dublin Bus routes whilst route 702 Aircoach service starting at Charlesland links the area with Dublin Airport.

Bray and Greystones are linked by a Cliff Walk, which follows the route of the railway line around Bray Head. The walk is 6 km long and takes approximately two hours. 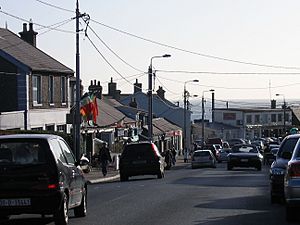 This was to be a €300 million redevelopment scheme for the harbour, to be built by the Sispar consortium (Sispar is a joint venture consortium of Sisk and Michael Cotter's Park Developments) in a public-private partnership with Wicklow County Council. This has been and remains a major topical issue in the town. Objections revolved around the privatisation of public beach front land without broad public agreement, but work started. The development was to include a new harbour, 341 apartments, a 230 berth marina, a new public plaza and facilities for local sporting clubs.

On the granting of planning permission, 6,210 submissions were received by An Bord Pleanála on initial plans, of which more than 6,200 were objections. Many of the objections came from outside County Wicklow, according to a spokesman for Wicklow County Council. Many objected to specifics of the plan while approving the general idea. An oral hearing was held and the board requested the developers to make certain changes which resulted in the plans being scaled down by approximately 10%. Some 3,700 objections were made on these updated plans. On 9 August 2007, the board approved the final plans, while imposing 13 conditions on construction works, including the retention of public access to the Cliff Walk during the development period, strict guidelines in relation to dust suppression, the re-use of demolition materials, and limitations on the hours of operation and noise levels. The board also over-ruled an earlier inspector's report, instead permitting an old unlicensed landfill to remain beside the new apartments.

In February 2010, it was announced that development of the marina would be paused indefinitely due to conditions in the Irish property market.

After the development plans stalled, the loans attached to the development were transferred to NAMA. Sispar insisted that it needed funding from NAMA to finish the project. In September 2012 it was reported that NAMA had written off €50m owed for the troubled development of Greystones Harbour. It appeared that it was not the Sispar consortium but Sisk alone that controlled the loans.

Greystones and its environs (including Delgany) are home to several celebrities including:

Greystones has town twinning agreements with:

Greystones has variety of Christian denominations in the locality, with most divisions of mainstream Christianity represented. There is a Roman Catholic, a Presbyterian, an Anglican (Church of Ireland), an Evangelical, and an Evangelical Arminian church in Greystones. Carraig Eden Theological College is the premier Pentecostal centre for theological study and ministerial training in Ireland, offering BTh and MTh degrees in Applied Theology The majority of residents are Roman Catholic, but Greystones is the town with the highest population of Protestants in the Republic of Ireland with 9.77% of residents claiming to be Church of Ireland (according to the 2006 census).

All content from Kiddle encyclopedia articles (including the article images and facts) can be freely used under Attribution-ShareAlike license, unless stated otherwise. Cite this article:
Greystones Facts for Kids. Kiddle Encyclopedia.