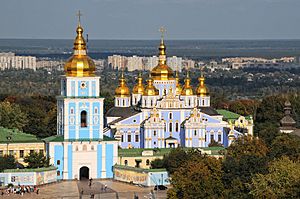 The Ukrainian Orthodox Church is one of two major Orthodox Christian denominations in Ukraine. It has around 8-10 million members worldwide. The head of the church is the Metropolitian of Kyiv and All Ukraine.

All content from Kiddle encyclopedia articles (including the article images and facts) can be freely used under Attribution-ShareAlike license, unless stated otherwise. Cite this article:
Ukrainian Orthodox Church Facts for Kids. Kiddle Encyclopedia.