The Tom Clarke Bridge (Irish: Droichead Thomáis Uí Chléirigh), formerly and commonly known as the East-Link Toll Bridge, is a toll bridge in Dublin, Ireland, on the River Liffey, owned and operated by Dublin City Council. The bascule-type lifting bridge, which links North Wall to Ringsend, is the last bridge on the Liffey, which opens out into Dublin Port and then Dublin Bay just beyond. The bridge forms part of the R131 regional road.

The bridge is the most easterly crossing on the Liffey, and replaced a number of ferries that carried cross-rover traffic at the point as early as 1655. The bridge was built by NTR, and opened to vehicular traffic in October 1984. The bridge reverted to city council control on 31 December 2015.

The city centre is west of the bridge, which links routes on the eastern side of Dublin city. The Dublin Port Tunnel terminates north of the East-Link along East Wall Road, in the Docklands on the north bank of the Liffey. Most of Dublin's docklands are east of the bridge, but it is raised on average three times per day to allow river traffic to pass. 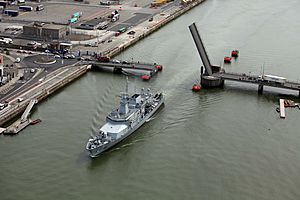 Originally adopting a functional name, the East-Link bridge was officially renamed as Thomas Clarke Bridge by President Michael D. Higgins to commemorate the Irish republican Thomas Clarke. The renaming ceremony was on 3 May 2016, marking the centenary of the day Clarke was shot in Kilmainham Gaol for his involvement in the 1916 Easter Rising.

All content from Kiddle encyclopedia articles (including the article images and facts) can be freely used under Attribution-ShareAlike license, unless stated otherwise. Cite this article:
East-Link (Dublin) Facts for Kids. Kiddle Encyclopedia.